Share All sharing options for: Billy Harris (the Elder) 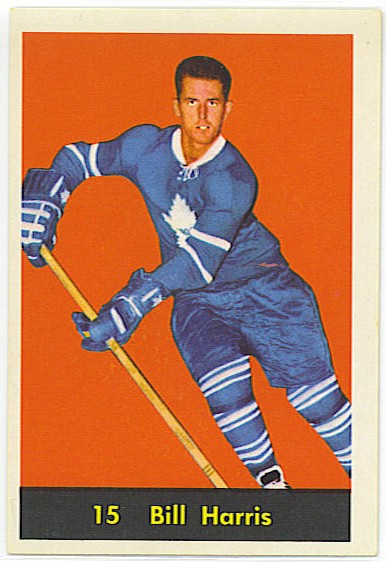 One of the early quotes from Brian Burke about building teams was that he liked to add depth at the top of the lineup rather than at the bottom.  This would shove all the talent down one rung and make you stronger throughout the team.

This is more or less what befell Billy Harris.

The team that won the four Cups in the 1960s really began to show itself in the later 1950s.  While Horton was in the lineup already (though coming off a really nasty injury), the revival began with a group of forwards that started to appear in 1955.  Among these forwards was a lanky (this term applies to non-Kazakhs as well) centre named Billy Harris.

Billy was a Toronto kid who came up through the Marlies system and was part of the Memorial Cup team of 1954-55.  He joined a team that hadn't made it out of the first round in four seasons and was in the middle of a serious retooling.  There were innumerable young players who'd get a look here and there over the next couple of seasons, and the best of these would prove to be the core of the future champions.

He was a good skater and stickhandler and within a couple of seasons was centering the top lines of the Leafs.  In 1957-58 and 1958-59, he trailed only Dick Duff amongst Leaf scorers.

By the end of the 1950s, though, there were some more players emerging and they started taking some of Billy's minutes.  The arrival of Kelly pushed him down one notch, Keon another.  During the championshop years, Billy was basically in a support role.  Still a popular player, there was a lot of protest from fans when his Leaf time finally ended in the middle of 1964-65.  He'd be dealt in the off-season to Detroit.

He went on to play briefly with the Canadian national team after his NHL days were done.  This exposed him to international hockey and from there, he spent a year in Sweden coaching their national team.  He coached a number of WHA teams, including the Toronto Toros, and was behind the bench for the 1974 Summit Series.

Billy was a shutterbug and recorded most of his time with the Leafs.  He put together a really nice book called 'The Glory Years,' which went through the Leaf teams he played on.  He died in 2001, still too young at 65. 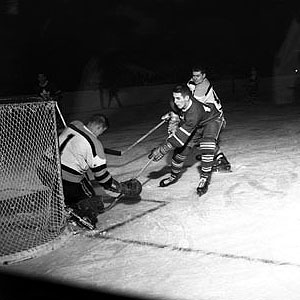 - Traded to Detroit by Toronto with Andy Bathgate and Gary Jarrett for Marcel Pronovost, Larry Jeffrey, Ed Joyal, Lowell MacDonald and Aut Erickson, May 20, 1965.
- Claimed by California (Oakland) from Detroit in Expansion Draft, June 6, 1967.
- Traded to Pittsburgh by Oakland for Bob Dillabough, November 29, 1968.


The HHOF take on Billy:

"Born and raised in Toronto, Billy's lifelong dream was to play for his hometown Maple Leafs. The dream became reality in two manners -- first, when he was signed by the Leaf organization in 1950 and became a Marlboro in the junior ranks, then in 1955 when he joined the parent Maple Leafs of the NHL. Billy was a dependable two-way centre, and enjoyed three consecutive Stanley Cup championships with Toronto in 1961-62, 1962-63 and 1963-64. An avid photographer, he chronicled the celebrations in a book titled, 'The Glory Years: Memoirs of a Decade - 1955-65.' In May 1965, Harris was traded to Detroit with Andy Bathgate and Gary Jarrett for Marcel Pronovost, Larry Jeffrey, Ed Joyal, Aut Erickson and Lowell MacDonald. A part-timer with the Red Wings, Harris spent 1966-67 with their AHL affiliate in Pittsburgh, helping the Hornets win the Calder Cup championship. The expansion Oakland Seals claimed Billy in the 1967 draft. During his second season with the fledgling franchise, Harris was traded to the Pittsburgh Penguins for Bob Dillabough. Billy coached the Canadian National Team during the 1969-70 season, then left the coaching ranks to pursue his degree at Laurentian University in Sudbury, Ontario, where he also served as hockey coach. After retiring, Billy Harris spent several years working for the Toronto Maple Leafs' alumni association before his death September 20, 2001, nine days shy of his 66th birthday." 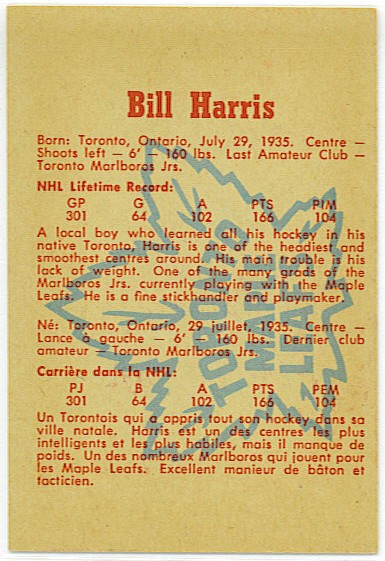