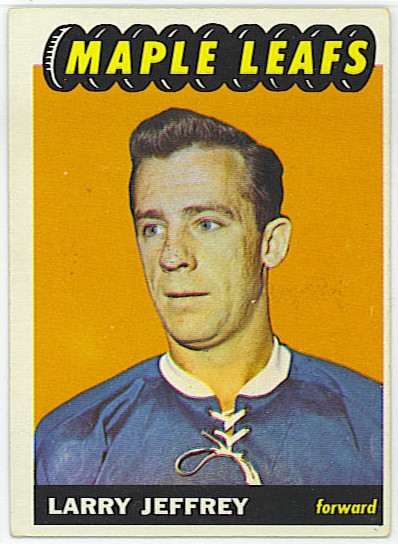 Heading back into Boston tonight, a little attention to defensive detail amongst the forwards might be a useful thing.

Larry Jeffrey was pretty good at that.  It's how he carved out his niche in the NHL.  Killing penalties and playing solid defense was also a good way to endear oneself to Leaf coach Punch Imlach, and Jeffrey managed to play a solid role on the 1966-67 Leafs.  He'd miss a good chunk of the playoffs, though, thanks to a knee injury.  Injuries to his knees would basically define his career.

Joe Pelletier described some of the "therapy" Jeffrey was given:

While playing junior hockey with the Red Wings affiliate in Hamilton, Jeffrey suffered a severe charley horse that prevented him from even bending the joint.

"It just kept causing me problems every year after that. Probably because in those days they didn't have the equipment to look after severe injuries," suggested Jeffrey. "They had a shower and a hose and that was your whirlpool-type thing. You held the hose to cause stimulation to the charley horse."

Later, adhesions developed on his leg. The Wings brought Jeffrey to Detroit to have them primitively broken.

"One doctor got my shoulder and held me, the other got on my leg and just literally grabbed it and bent it with his weight. They gave me a mild sedative. I remember everything about it. When he gave my knee the pressure, it was just like breaking bones. It was very painful. I heard the cracking. I thought they broke my leg rather than the adhesions. I thought it was a rather cruel way of doing it."

Jeffrey would play his entire NHL career wearing knee braces and would have nine different surgeries to try to repair the joint.

Post-1967, Jeffrey played with the Rangers, doing the same basic job he did with the Leafs.  The knees would end his career by 1969. 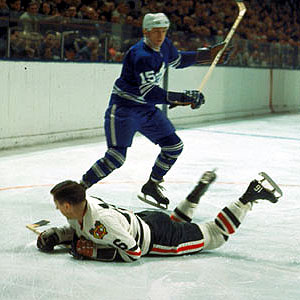 
the HHOF take on Larry:

"Larry Jeffrey was a solid two-way left winger who played nearly 400 NHL games despite chronic knee woes. His ability to soldier on was remarkable considering the relatively primitive sports injury treatments that were available forty years ago.

The native of Goderich, Ontario played three seasons with the OHA's Hamilton Red Wings. It was in junior that he suffered a severe charley horse that prevented him from bending his leg properly. He kept playing and ended up putting tremendous strain on his knee ligaments and joints in the ensuing years.

In 1961-62, he debuted with the Detroit Red Wings and looked fairly solid with eight points in 18 matches. He spent the bulk of the season with the WHL's Edmonton Flyers where he averaged nearly a point per game. He played 53 and 58 games for Detroit over the next two seasons. The highlight of his career in Motown was scoring seven points when the team reached the final in 1964.

Jeffrey was sent to Toronto in May 1965 in the same deal that involved Marcel Pronovost and Andy Bathgate. In 1966-67, he played 56 games for Toronto in the regular season then played six in the playoffs before getting hurt. The Maple Leafs won the Stanley Cup that year and, fittingly, Jeffrey was on crutches for the team picture when they were presented their prize.

By the start of the 1967-68 season, Jeffrey was with the New York Rangers. Over the next two years he played his last 122 NHL games. He retired after suffering another injury at the training camp of the AHL's Cleveland Barons in 1970." 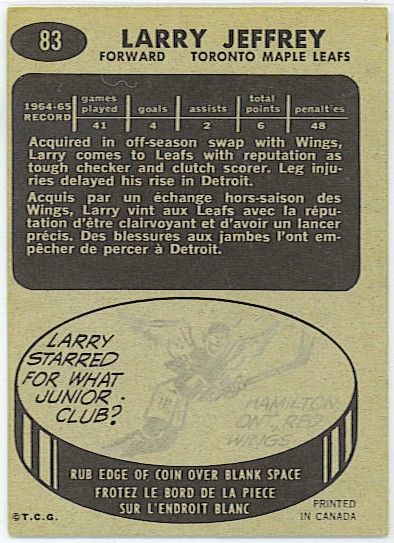