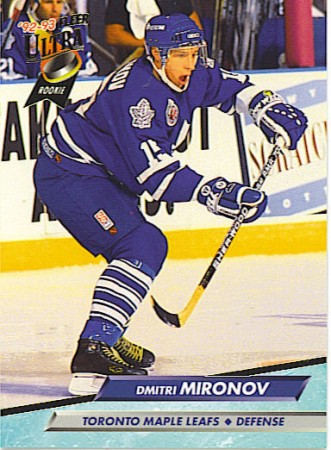 It was a strange new world in the early 1990s as the Russians began to arrive.  What began as a trickle with Sergei Priakin in Calgary turned into a torrent of names we'd only ever seen in Canada Cups, Olympics and world championships.

Toronto dipped a toe in that water with Alexander Godydyuk in 1990-91.  He was off to Calgary in the Gilmour deal in 1991-92.  That same season, we began to hear talk of a 25-year-old Russian defenseman (he'd be 26 by the time he got here) who would be available to us after the Olympics.  His name was Dmitri Mironov.  The Russians seemed to be helping everyone else, so we expected good things.

Dmitri's game was really built around being an offensive defenseman, but in Toronto he didn't set the world on fire right away.  He didn't play a whole ton the first year under Burns and during the playoff run he was on the ice for a handful of just back-breaking shorthanded goals.  After that season, I wouldn't have been dead unhappy to have seen him run out of town.

In 1993-94, though, he'd settle in.  While his point total in 76 games wasn't remarkably higher than what he'd had in just 59 games the year before, he played a more complete game and wasn't at all scary to have out there.  The Leafs went to the third round again and I can't recall Mironov being out there for any shorties the Leafs gave up.  (Seriously, in '92-93 he seemed to have been out there for all of them, even if they weren't directly his fault.)  He actually scored 6 goals and 15 points in the post-season that year.

1994-95 was a pretty tough season all around, and the Leafs decided to shake things up a bit more, going for the gusto and adding a sure-fire can't-miss offensive defenseman named Larry Murphy.  This cost them Mironov and a second.  It might seem like they gave up on him a bit early, but he was already 29, and besides, it was Larry Murphy coming back.  What could go wrong?  (Note: I actually liked Murphy and thought he got a raw deal, but that's for another LotD.)

Mironov bounced around after that, but made sure to do what all Leaf defensemen had to do (I think it was a contractual obligation) and played for the Red Wings - in his case as part of their '98 Cup winner. 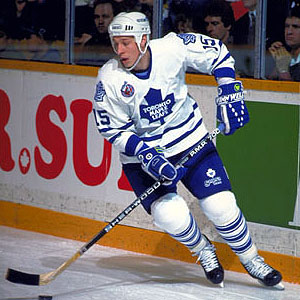 via www.legendsofhockey.net
Dimitri makes a friend:


the HHOF take on Dmitri (this reads like two distinct pieces stuck together):

"This Christmas baby was born with the gift of hockey prowess, and he used it well during his career. A late round draft choice of the Toronto Maple Leafs, Mironov joined the NHL club in 1991-92 after playing in the Olympic Winter Games with the Unified Team.

For the next three seasons, Mironov was a full-time Leaf, unleashing his hard shot on opposing netminders. But while waiting for the 1995-96 season to begin, Mironov was traded with a draft choice to the Penguins for Larry Murphy. After a year and a bit with the Penguins, Pittsburgh traded "Tree" to the Mighty Ducks of Anaheim.

Mironov played in California until March 1998 when he was sent to Detroit as defense insurance for the Red Wings' march to the Stanley Cup. It worked, and Mironov can now proudly boast of a Stanley Cup championship ring from the 1997-98 season. By 1998-99, he had become a Washington Capital. Dmitri has a brother who also made the NHL - Boris Mironov.

At the age of 14, Dmitri found he was distracted and he began to skip workouts. The club stopped sending him out on the ice, but he didn't want to play anyway and even considered forgetting all about hockey. But his father and, oddly enough, his younger brother set him straight. His father would go out looking for him and take him out of the company of his friends while his brother, Boris, who was enrolled with the CSKA club, would take him to the stadium. The following year SKA MVO repeated their success in the first league and Mironov was once again out on top in his club. But right after the New Year he was called up by Central Red Army.

There were also invitations to join the national team. Mironov made his debut at the Izvestia Cup tournament in 1991. That was followed by the World Championships in Finland, where he made the second All-Star team. It was at that championship that Mironov was spotted by scouts and put on the draft list of the Toronto Maple Leafs.

In 1992 the Russians sent a very young team to the Olympics in France. At 25, Mironov was the most experienced defenseman. But they won the ice hockey tournament, beating the Eric Lindros-led Team Canada in the final. Two-thirds of the players from that Russian team are now in the NHL.

He then played seven games for the Leafs at season's end, scored one goal and got a broken nose. His real debut came the next year. He had to get used to the tight game schedule, a completely new style of playing and constant changes of partners. Toronto head coach Pat Burns even tried Mironov out as a forward. It was the best season for the Maple Leafs in the 1990s.

After two poor conference finals in a row, the Leafs began a string of trades. Mironov was sent to the Pittsburgh Penguins in exchange for defenseman Larry Murphy. In Pittsburgh, Mironov's game didn't click, so Dmitri was careful in his next trade. The Anaheim Mighty Ducks were a very young team, only three years into their franchise. Before the season started, bookmakers were giving them 150-1 odds. But Mironov came to the team with one of the best young coaches in the NHL, Ron Wilson, and upcoming stars Paul Kariya and Teemu Selanne. It could be said that the years with Anaheim were the best in Mironov's NHL career. And the power-play unit led by Mironov, Kariya and Selanne was considered one of the best in the league. Dmitri also took part in the silver medal win by Russia at the Olympic tournament in Nagano. Then came his most surprising trade of all.

He came to the Detroit Red Wings near the end of the regular season, played only three months for the team and won the Stanley Cup. And he was playing again with his former teammates Viacheslav Fetisov, Igor Larionov and Sergei Fedorov. The parade of champions was held in Detroit, but Mironov's contract expired and for some reason the new Red Wings management was in no hurry to renew it. He began to search for a new club and settled on the Washington Capitals, whose coach, Ron Wilson, wanted Mironov back in his lineup."

(emphasis mine - Dmitri was a Ron Wilson guy - who knew?) 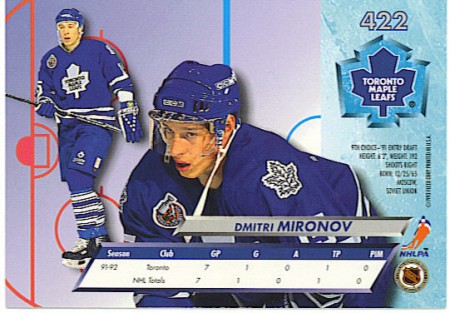