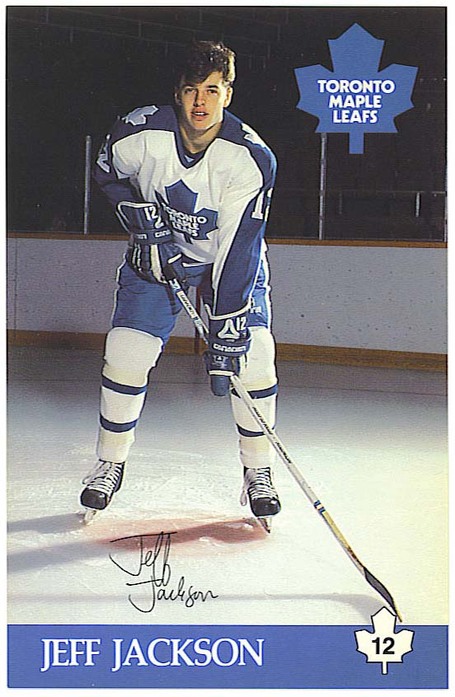 When the Jeff Jackson/Mark Osborne trade went down, I missed the news.  I had the game on the radio that night from about the second period onwards and couldn't for the life of me believe how this Osborne guy was always in position to intercept passes from our players.  Eventually, I clued in that Osborne was now a Leaf and the passes were going to him on purpose.

Jeff Jackson was one of those guys I remember as all hustle but not a lot of finish.  He got to the NHL because of his effort and work ethic far more than for his talents.  He was a great skater and could get in there in a real hurry on the forecheck.  He'd sacrifice the body, get back up and do it all over again.

It was either his good fortune or his misfortune to spend his career on some really lousy teams.  The Nordiques of the late 1980s were every bit as bad as the Leafs were, and often worse, so one had to get used to a lot of losing.  On the other hand, it offered the opportunity to play.

While I certainly don't remember him as a fighter, when one wanders around the youtubes, it's kind of amazing who Jackson stood in there against: there's a Kocur clip, a Semenko clip, Curran, Mellanby.  He didn't pick his spots.  I can't say how many of these fights he won, but it's indicative of someone who'd stand in front of an oncoming freight train if it would help the team.

He clearly wasn't a dummy, either.  After his career was over, he picked up a law degree at Western, practiced for a time with Heenan Blaikie and in '06 joined the Leaf front office, doing cap work and eventually becoming assistant GM of the Leafs and GM of the Marlies.  He survived the JFJ era and was kept on by Burke.

Jeff doesn't win this one, but you can actually see him:

He wins this, but he's invisible, so it all evens out - plus, it's the Whalers:


the HHOF take on Jeff:

"Although he was not blessed with natural scoring ability, Jeff Jackson used his speed and size to drive to the net, dig the puck out of the corners, and check the best forwards on the opposition. He played parts of eight seasons in the NHL with four different teams.

Jackson hailed from the southwestern Ontario community of Dresden. He learned the game in the local system before spending one year with the Tier II Newmarket Flyers. He was then chosen by the Brantford Alexanders in the OHL Draft. Jackson recorded 112 points in two seasons with Brantford and was the second round choice of the Toronto Maple Leafs in 1983 in the NHL Entry Draft. In 1984 he was voted the Alexanders' most valuable player.

In 1984-85, Jackson scored 27 points in 20 games for the Hamilton Steelhawks (formerly the Brantford Alexanders), and helped Canada win the gold medal at the World Junior Championships. Jackson was Canada's third leading scoring with eight points in seven games playing on a line with Brian Bradley and Adam Creighton. To top the year off, he suited up with the Maple Leafs for 17 games. He spent most of the next season gaining seasoning with the St. Catharines Saints of the AHL. Jackson's defensive play and work in the corners improved under Saints' coach John Brophy.

It appeared that Jackson had locked up a regular spot in the Maple Leaf lineup in 1986-87 when a trade brought him to the New York Rangers. The deal was more a function of the Leafs wanting the experienced Mark Osborne in return. Prior to the 1987-88 Jackson was part of major deal with Quebec for John Ogrodnick.

Jackson played his finest hockey during his three-plus years with the Nordiques but the team was the worst in the NHL. During these difficult years he formed an effective checking line with Mike Eagles and Alan Haworth. He played one game with the Chicago Black Hawks in 1991-92 after signing as a free agent then retired at the end of the season." 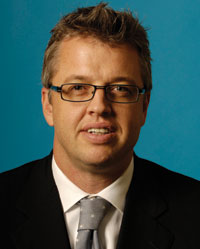 Jeff the exec - via cdn.nhl.com