About a month ago, when Tom Kurvers was the LotD, the Leafs were still just 3-11-5 and the talk about the Leafs having traded away Taylor Hall was still in full swing.  In comparing this season to 1990-91, I said this:

By this time, Doug Carpenter had been fired, John McIntyre had been shipped out for Mike Krushelnyski, and Olczyk and Osborne had gone to Winnipeg for Ellett and Fenton.  On Nov. 14, Tom Kurvers, whose year had been brutal, blew out a knee.  To make up for his loss, the trade that sent first-rounder Scott Pearson and a pair of seconds to Quebec for Broten, DeBlois and Petit took place three days later (19 years ago yesterday).  (Note - because of scheduling differences, those Leafs were ahead in terms of games played.  Kurvers was hurt in game 21.)

Comparatively, this year's Leafs have been remarkably static.  There have been no player moves of note other than the odd Marlie shuffle.  Ron Wilson is still coach.  (Are the pending Olympics playing a part in this?)  Brian Burke still hasn't shown the kind of panic that seemed to envelope that earlier team.  He seems to be less afraid to be "the guy who traded Taylor Hall" than Floyd Smith seemed to be about being "the guy who traded Eric Lindros."  A calm hand might yet figure out how to fix this thing, or at least minimize the damage without destroying the future.

Since that time, the Leafs have gone 8-3-2 and while they're clearly not out of the woods yet, they have joined the pack and are currently tied with 6(!) other teams in 22nd.  More importantly, they're two points out of eighth in the conference.  (Is this the year that it doesn't take 92-95 points to make the playoffs?  Montreal is on pace for about 80 - with so few real bottom feeders this year, it could be a really odd set of final standings.)

That calm hand at the top has really helped stabilize the entire team.  There were no rash moves.  Howard Berger may say that nobody in the world would have imagined that the Leafs could have fought their way back into it.  Obviously, Burke is out of this world.  (Well, him and eyebeleaf.)

The time period between November 17 and December 17, 1990 was comparatively quiet (on Dec. 17, Curran and Franceschetti would go to Buffalo in the Foligno deal).  The Leafs were sitting at 8-24-1 heading into a Dec. 15 game against St. Louis (which they lost).  It was almost a month since they'd made a trade with the Nordiques, sending former first-rounder Scott Pearson plus two second-round picks for Michel Petit and a pair of 30-somethings whose days were numbered - Lucien DeBlois and Aaron Broten.

It hadn't helped yet - the Leafs still trailed the Nordiques by three points.

Aaron Broten wasn't the flashy scorer his brother Neal had been, but he was a pretty solid performer for the Devils teams that finally made the playoffs in the late '80s.  His production had dipped and he was now playing basically third-line duty - solid defense plus the odd goal.

Other than uncertainty, the defining characteristic of 1990-91 was injuries, and one claimed Broten after just 27 games.  In a game against Chicago on Jan. 26, 1991, he separated his shoulder and was done for the season.

It was a short stint in Toronto. Aaron would sign with the Jets in the off-season.  I have a vague memory of him scoring a goal in a Leaf uniform, that's about it.

The thing I find remarkable is that on a team that bad, Aaron Broten managed to be a plus 12 in those 27 games.  That was a full 10 points better than anyone else on the team.  He was clearly doing something right, I guess.

- Transferred to New Jersey after Colorado franchise relocated, June 30, 1982.
- Traded to Minnesota by New Jersey for Bob Brooke, January 5, 1990.
- Claimed by Quebec from Minnesota in Waiver Draft, October 1, 1990.
- Traded to Toronto by Quebec with Lucien DeBlois and Michel Petit for Scott Pearson and Toronto's 2nd round choices in 1991 (later traded to Washington - Washington selected Eric Lavigne) and 1992 (Tuomas Gronman) Entry Drafts, November 17, 1990.
- Signed as a free agent by Winnipeg, January 21, 1992.


the HHOF take on Aaron:

"Aaron Broten was a solid two-way forward who played over 700 games in the 80s and 90s. Comfortable at centre and left wing, he registered three 20-goal seasons and was effective on both specialty teams.

The native of Roseau, Minnesota was a member of the famous family that also sent his brothers Neal and Paul to the NHL. He was a top high school player in 1978-79 when he scored seven points in five games for the USA at the World Junior Championships. Broten attended the University of Minnesota for two years where he was an offensive force. Following an excellent freshman year, he was chosen 106th overall by the Colorado Rockies at the Entry Draft. The next year he led the WCHA in goals, assists and points, was placed on the conference's first all-star team and named to the NCAA Championship all-tournament team. He capped off his dream season by playing his first two NHL games and skating for the U.S. at the World Championships.

After being recalled from the minors in 1981-82, Broten enjoyed a solid rookie season with 39 points in 58 games. When the Rockies missed the playoffs, the young winger played for the eighth place U.S. at the World Championships. Broten was a versatile player in 1982-83 when he scored 55 points and was a member of the power play and penalty killing units.

Broten joined his brother Neal on the U.S. Canada Cup team that reached the semi-finals in 1984. During the 1984-85 season, he hit the 20-goal mark for the first time then played for his country at the World Championships when they just missed winning a medal. Broten also played for the U.S. at the World Championships in 1986 and 1987 as well as the 1987 Canada Cup. In 1987 and 1988, the talented forward was at his most productive with consecutive 26-goal seasons.

In January 1990, Broten returned home when he was acquired by the Minnesota North Stars for Bob Brooke. He was more of a playmaker and checker for his new club and was on hand in September when Minnesota ventured to Moscow as part of the Friendship Tour. Before the 1990-91 season commenced, he was claimed on waivers by the lowly Quebec Nordiques. Broten was unhappy on the sad sack Nords and was part of mid-season trade that saw him join teammates Michel Petit and Lucien Deblois in Toronto. The trio helped the Maple Leafs bounce back from a miserable start and play fairly competitive hockey in the second half of the season. Broten retired in 1992 after playing 25 games for the Winnipeg Jets." 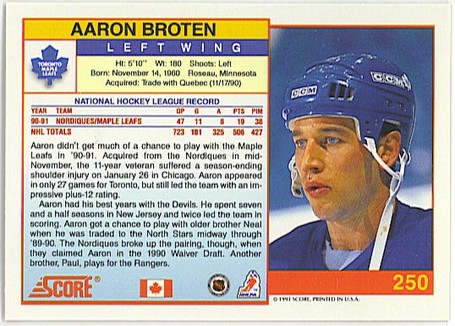