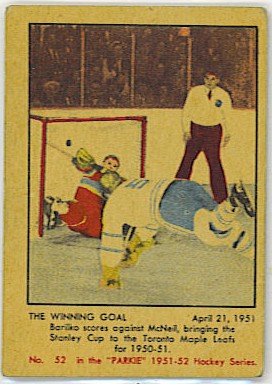 If that shot had gone wide, Bill Barilko would have been in a lot of trouble.

Here it was, overtime in Game 5 of the Stanley Cup Final, and Bill had abandoned his position at the left point to gamble on a loose puck near the faceoff circle.  Worse, he'd hooked skates with teammate Cal Gardner (who really should have been the one after that puck) and was prone on the ice, completely out of position for the return rush - and it was the Richard line on the ice for Montreal.

As it was, he was the hero.  Leaf coach Joe Primeau, not quite the stickler for defensive positioning that Hap Day was, but still pretty conscious of it, let Barilko know that this time, it was OK.  "I told you the slap shot was a deadly shot," Barilko told him in return.

Carried around on his teammates' shoulders, Bill was the conquering hero.

And then he became the lost one.

In what is probably the second-greatest loss associated with someone named Henry Hudson, Bill and Hudson were lost in a plane crash that summer.  Everyone knows the story.  During the parade in 1962, someone came up to the Big M and told him they'd found the body.  He got the significance right away.

Bill wasn't inept offensively.  He'd score a goal every ten games or so, which is about on par for a defenseman of that era.  It just wasn't his game.  Defensive play and punishing hits were.  If an opponent was "Barilkoed," you knew he'd been victimized by one of Bill's hits.  He liked to catch you unaware, then warn you a second or so before the hit, when it was too late to do anything about it.  If, as a player, you heard someone say "boop boop," it was already too late.

He came to the Leafs from - of all places - Hollywood.  It must have been a pretty big change for a kid from Timmins whose earlier teams included the Holman Pluggers and Porcupine Combines.  He was brash, good-looking and confident.  He'd refer to himself in the third person as "the Kid."  "Don't worry, the Kid's going to be all right."

His first call-up was in late 1946-47, and he helped the Leafs win the Stanley Cup.  He'd win it in four of his five NHL seasons - quite the beginning to his NHL career.  Turk Broda called him the best defenseman that he'd ever played behind.

After his disappearance, rumours of every kind abounded, even that he'd gone to Russia, home of his forebears, to play hockey.  What was most certain was the hole he left in the Leaf lineup and the mark he'd left on the psyche of the city.  The Leafs tried a number of defenders in his place, eventually settling on a young Tim Horton.  Bill's number 5 went into retirement and hasn't been worn since.

His death was almost 60 years ago now, and he's still among the most famous players to have ever donned the sweater.

Every year, on the last day before I abandon the LotD for a couple of weeks' holiday, I try to pick someone with enough stature to carry things throughout the season.

This year, it's Bill - a nod to the player and to the sphere that bears his name.  I came to the Barilkosphere a year and a half ago out of the world of message boards.  It's been a tremendous time and what I've seen done has really astonished me - the analytical work, the humour, the research.

I see the respect it garners when eyebeleaf or Toronto Mike cover games at the behest of the team, when PPP gets himself a seat at the draft, when a publication like the Maple Leafs Annual can come into existence, when media types acknowledge our existence or even pay the ultimate compliment of ripping us off.  It's really fantastic.  Great job everyone. 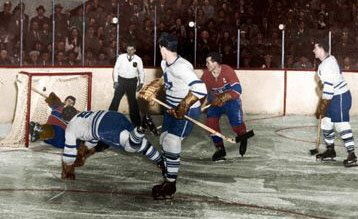 a nicely-colourized version of this shot - via 3.bp.blogspot.com
Ken Dryden on "the goal."
A solid tribute, even if "Bashin' Bill" is misspelled.


the HHOF take on Bill:

"The short, remarkable life of Bill Barilko ended in tragedy just weeks after he became a team's hero. Barilko hailed from Northern Ontario and pursued his lifelong dream to play for the Maple Leafs. He started his pro career playing in Hollywood of all places, but his ferocious checking and determined play earned him a callup to Maple Leaf Gardens, and extraordinary promotion, to say the least.

Once Conn Smythe saw Barilko play in the Blue and White, he knew his defenceman was never going to Hollywood again except, perhaps, on a summer vacation. Barilko hit every opponent with equal force and was a rock on Toronto's blueline. In his five NHL seasons, he won four Stanley Cups, scoring, arguably the most dramatic Stanley Cup winning goal, and certainly the one that is reproduced more frequently than any other.

In 1951, the Toronto-Montreal finals were the closest ever, with all five games going into overtime, the only such final series in Cup history. It was Barilko who scored the winner in that deciding game, hero for a city and country. But in the summer, he went on a fishing trip with a friend, taking a small plane into the remotest north of Ontario. On its return, the friends likely weighed the plane down with catch, and the plane crashed, killing the two men. It was not until 1962, that the plane and remains were discovered by pilot Ron Boyd, shortly after the Leafs had won the Cup. It was their first victory since Barilko's heroics." 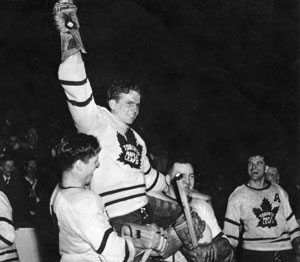