Share All sharing options for: Billy Harris (the Younger) 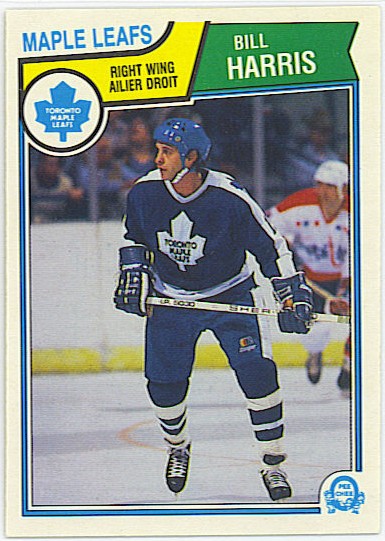 Imagine you're the first-ever draft pick of a new expansion team.  You stick with them through all the bad seasons, are with them as they start to assemble an awesome collection of talent, have some early playoff success, and just as they're about to go all dynasty on everyone, you're dealt away at the trade deadline and never get a sniff again.

That's the story of Billy Harris (the younger).  He was the first player selected in the 1972 Entry Draft, and the first-ever pick of the New York Islanders.  He was there for the arrival of Potvin, Trottier, Bossy et al, and was part of their early playoff runs.  He was the team's all-time points leader through their first four seasons, and their all-time goals leader through their first seven.  At the 1979 trade deadline, though, he went to LA for Butch Goring - whose role in the four Cup wins, admittedly, was huge.

(Now, as an aside, has there ever been a more inappropriately-named hockey player than Butch Goring?  Butch was born into what might be the best goon name you could possibly have, and yet he was a little guy who was basically Kyle Wellwood with Doug Gilmour's work ethic.  Butch earned 102 penalty minutes over an 1100-game career.)

When the Leafs were looking to move Ian Turnbull on Rememberance Day, 1981, they picked up Billy and John Gibson.  Not unlike what happened with Rene Robert, Billy (who had still scored 20 goals in LA and occasionally would sub in on the Triple Crown Line) got hurt shortly after arriving and was never really the same again.

He played a lesser role on the Leafs for the next two seasons, and then it was back to LA to finish it out. 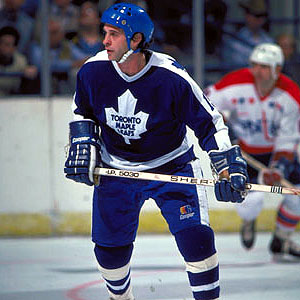 Nice picture - looks just like the one on the card.... - via www.legendsofhockey.net

the HHOF take on Billy:

"Although no relation to 'the other' Billy Harris (NHL veteran between 1955-69), the parallels are striking. Both were born William Edward Harris in Toronto, Ontario, and made their marks early as members of the Toronto Marlboros. But THIS Billy Harris was born January 29, 1952. Bill joined the Toronto Marlboros in 1968-69, and drew attention immediately. In his third season of junior, Harris was named to the Second All-Star Team and led all rightwingers in points with 82. But it was in 1971-72, when placed on a line with Dave Gardner and Steve Shutt, that Billy exploded offensively. The line is regarded as one of the finest in OHA history, with Billy scoring 57 goals, 72 assists and a league-best 129 points, tying linemate Dave Gardner for the scoring championship. Leftwinger Shutt collected 112 points. Harris was named to the OHA's First All-Star Team. That summer, all three linemates were chosen in the first round of the NHL Entry Draft. Shutt and Gardner went to the Montreal Canadiens, fourth and eighth respectively, while Bill Harris was the first overall election, chosen by the New York Islanders. In September 1972, Harris, along with Michel Larocque and John VanBoxmeer, joined Team Canada 72 in preparation for the Summit Series versus Russia, but the three juniors did not play in actual competition. Billy Harris was an immediate addition to the expansion Islanders lineup that fall and scored in his first NHL game, which was also the first game for the franchise. Prior to Mike Bossy's arrival, Harris played on a line with Clark Gillies and Bryan Trottier that was nicknamed the Long Island Lightning Company. Through eight seasons on Long Island, Harris was consistently a 20-goal scorer, but just before the playoffs in 1980, he was traded with Dave Lewis to the Los Angeles Kings for Butch Goring. The Islanders won the first of four Stanley Cup championships -- without their longtime star. Billy settled into L.A. life, often joining the Triple Crown Line during periods of injuries in 1980-81. Again, Harris scored 20 goals. He was traded to the Toronto Maple Leafs with John Gibson for Ian Turnbull in November 1981, but missed much of the 1981-82 season with a separated shoulder. Billy was never quite the same. His production dipped drastically until he was sold back to the Kings in February 1984. At the end of the season, Billy Harris retired, and went into real estate and the restaurant business. 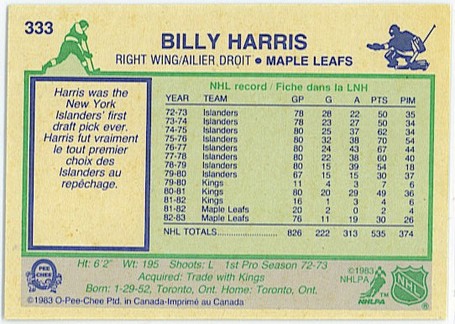