Share All sharing options for: Airing of Grievances - Francois Beauchemin 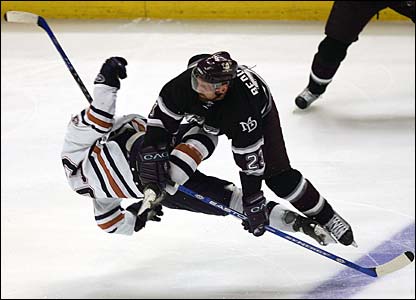 Why don't we see more of this?

I'm going to ignore your +/- rating because it's a flawed stat and you rang up most of your current deficit during Vesa Toskala and Joey MacDonald's race to the bottom at the beginning of the year. Toss in a new team, three new defence pairings, and I understand it being a hard transition. And forget about the points totals. Despite a healthy amount of ice-time on the powerplay it was probably a case of fans hoping for too much out of the new guy. The same thing killed Pavel Kubina's time in Toronto.

But here's one thing completely under your control: Hits. So far you're 7th on the team with 42 which is barely above one per game. Mike Komisarek has almost double that total and he's missed eight games! Look at that picture above. That's the kind of hard-nosed, dare I say it...truculent, defencemen we thought we were getting. See this? That is good. Now do it more often.