Like the Leafs Ian White, Santa Delivers In the Clutch

Christmas came and went without much of a hitch for mi familia blurr here in California.  The sun shone, the weather was pleasant.  You know, just your typical Christmas day.  Presents were opened, receipts exchanged, food eaten.  When I finally got home, I took stock of our haul, and was pleased with the end result.  The thing was, the gifts weren't done yet.

The next night, after dinner with some long lost friends, we all set off to a party for a good mutual friend of ours.  And my pal (for whom the party was,) let's call him "Dan", just so happened to work for a company called Easton, down in San Diego.

Now Dan has been a cycling guy for as long as I've known him, so working for Easton in their cycling division was a dream come true, but what I didn't know, was his close connections with Easton's big money maker, the hockey division.

Turns out, over the years of my rambling, Dan happened to remember a few things, one being I liked the Leafs, and at some point, he must have heard me say something about some guy named Shea Weber (in case you didn't know, blurr likey da Weber.)  The problem is, Weber doesn't play for the Leafs... 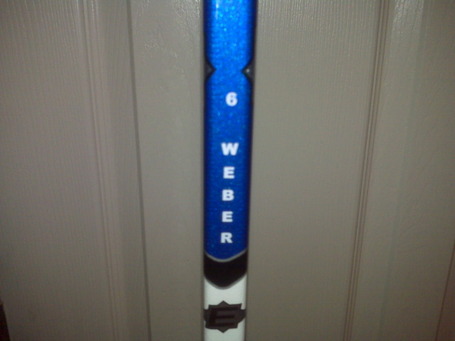 Turns out this stick was made specifically for Shea (as in, this was part of his latest batch of sticks destined for Nashville,) but had a very, very (did I mention "very?") minor defect in the blade.  Dan managed to have them paint the stick in Leafs colors for me, and hand delivered it.  I was blown away.  He apologized for it not being a "game worn" (his words...) stick, or for a Leafs player, but the way I see it, it's a one of a kind.  Until Burke makes my dream come true...

Hope you all had a great weekend.  Let's get down to some links...