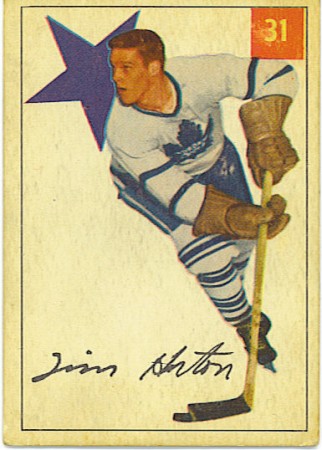 With his 28th point in 1980-81, Borje Salming became the Leafs' all-time scoring leader amongst defensemen, passing the legendary Tim Horton.

It took almost 30 years more to move Horton to third.  Tomas Kaberle pulled that off in setting up Colton Orr for his first of the season on Tuesday.  He's still 310 points back of Salming, though, so odds are Borje is safe for the rest of the year, at least.

More importantly, there's no evidence that either Kaberle or Salming can make coffee or doughnuts to save their lives, so Tim's contribution to Canadian culture reigns supreme.

The passage of time and the success of his business has made the name "Tim Horton's" into a brand rather than a name.  My nieces and nephews are almost shocked to learn that there actually was a person by that name, that he played hockey and was one of the greats.  The removal of the Ken Danby portrait from the restaurants - part of the settlement with the family, I think - certainly contributes to this.  It removes the name from the person and leaves it simply with the product.

It's a shame, becuase he really was one of the greats.  I've said many a time that the best thing I get from LeafsTV is an appreciation of some of the players I never got to see, and Horton is first and foremost in that regard.

Really, in any game from the 50s or 60s, I find myself watching for a glimpse of number 7, almost to the exclusion of anyone else.  It's just something about the way he played - the composure in his own end, the way he cleared the zone, total calm under pressure.

In his earlier years, in the games we don't see because they either weren't televised or aren't otherwise available, Tim was far more of a rusher.  On the back of the card, they call him the Leafs' "razzle-dazzle" defenseman.  He learned to pick his spots better as he aged, I guess.  It's the later years where he was the perennial all-star, when he'd get the Norris votes even if he never put up quite the point totals to let him win one.

He was an early adopter of the slap shot.  Bernie Geoffrion gets a lot of credit because he was a flashy forward who scored a lot of goals with it.  Horton was the other one who had it early.  As a defender, he'd be the one cranking it from the point, a low, heavy shot, looking for the deflection - really the way a modern defenseman would play it.

Tim had his first cup of coffee (pun vaguely intended) with the Leafs in the late 1940s - as he got older he'd often make the point that he'd first learned NHL defense under Hap Day.  In the early '50s, the Leafs looked to him to fill the void left by Bill Barilko.  Tim was a tough defenseman, too, but really a very different player.  Not as big as Bill or the same style of hitter, Tim had much better offensive skills and was a more accomplished rusher.

Getting his leg and jaw broken on a Bill Gadsby hit in 1955 almost finished him.  It took a couple of years before his game was really back, and he was very close to being traded away to Montreal.  As they say, it's the trades you don't make....

Tim wasn't without his faults - he could be a mite rambunctuous when into the beers and liked to drive a lot faster than he should have, but it's always striking when you hear people talk about him just how highly regarded he was as a person.  He was a person of integrity and decency and he did a lot of work in the community that was never really documented because he never did it to get in the papers.  His death was devastating to everyone who knew him.

Anyhow, next time you buy a coffee, raise a toast to the third-highest scorer among Leaf defensemen and one of the best to play the game.  It's not just a brand - it's a person.

The current top five defensive scorers as of today: 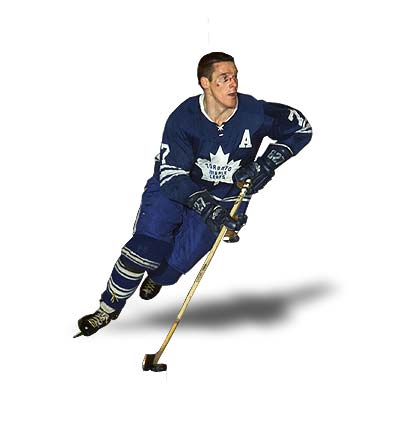 via www.legendsofhockey.net
You know someone is special when there's a clip on youtube that doesn't involve fighting:


the HHOF take on Tim:

"Though it would be impossible to prove, the case could be made that Tim Horton was the strongest man ever to lace up skates in the National Hockey League. As a junior player with the St. Michael's College team in the Ontario Hockey League, Horton had NHL scouts and executives claiming he'd be the league's all-time great defenseman. But Horton's career, for all of its early promise, got off to a slow start. Though his attributes were obvious, he took a while to mature as a defensive player and spent several years moving back and forth between Toronto and its minor-league team in Pittsburgh. When he did find a regular job with the Maple Leafs during the 1952-53 season, respect was hard to come by, mostly because the expectations had been so high during his junior days.

In 1954, having just turned 24, Horton was selected to the league's Second All-Star Team and his career took off from there. With a few weeks left in the 1954-55 season, however, Horton broke his leg and jaw in a thunderous collision with the New York Rangers' Bill Gadsby. Gadsby later said it was the hardest hit he ever delivered. Horton, in traction and fed intravenously for days afterwards in the hospital, certainly agreed. When he returned to the ice after missing almost half of the 1955-56 season, he was slow to regain his form.

In 1958-59, Horton was paired on the blue line with Allan Stanley. Stanley's solid play allowed Horton to take a few more chances carrying the puck, knowing he had the speed to recover should he lose possession and that Stanley would be there to back him up. With Bobby Baun and Carl Brewer also starring on defense, the Leafs had a core of skilled, rugged and reliable defensemen. And the defense was the foundation of a Toronto team that won the Stanley Cup in 1962, 1963 and 1964, with Horton earning a spot on the Second All-Star Team in 1963 and First Team honours in 1964. The team went through a minor slump in 1965 and for part of the season coach Punch Imlach moved Horton to the right wing on a line with George Armstrong and Red Kelly, another defenseman turned forward. Horton scored 12 goals, many of them with his huge slapshot from close range.

After the Leafs' last Stanley Cup win in 1967 - after which Horton was once again selected to the league's Second All-Star Team - the Maple Leafs went into decline. Many of the stars of the championship teams moved on or retired. Though he remained and was a First Team All-Star the following two seasons, Horton was tempted to retire in 1969 because of the success of his business off the ice, a chain of donut shops bearing his name, and of Punch Imlach's dismissal as coach of the club.

Horton claimed he wanted double his salary to even consider returning. Lacking any veteran leadership on its blue line, Toronto surprised Horton by giving him over $80,000, roughly double his salary of the year before. The team, so young that Horton was the oldest defender by 16 years, was dead last in the league in the spring of 1970. Horton's large salary was impractical for a team with little promise and he was traded to the New York Rangers. He spent a full season in New York in 1970-71, but was then selected in the next two intra-league expansion drafts, moving first to Pittsburgh for an injury-plagued season in 1971-72 and then to Punch Imlach's Buffalo Sabres.

Early in the morning of February 21, 1974, Tim Horton was killed in a single-car crash while driving home to Buffalo after a game in Toronto against his old team. Police who chased the sports car reported that it was traveling over 100 miles per hour before it crashed just outside of St. Catharines, Ontario. Toronto won the game that night, but Horton, even though he missed the third period with a jaw injury, was selected as the game's third star for his standout play. He left behind a wife and four daughters. He was inducted into the Hockey Hall of Fame in 1977. Today there are Tim Horton donut shops all across Canada." 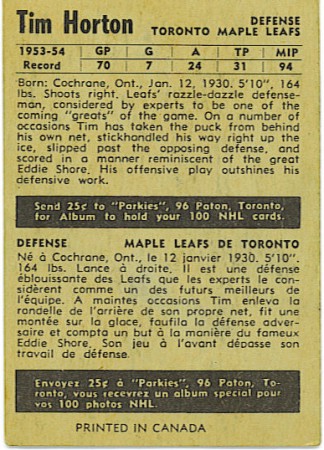