Share All sharing options for: Leafs Lose, Broad Side of Barn Safe

In preparing to write this post about last night's Leafs/Oilers game, I tried to think of a bunch of cliches that I could use to illustrate my frustration. "Flat as a Pancake" was a good start. "Give the Shirt Off Your Back" was a bit of a stretch and "You've Got Ants in Your Pants" kind of turned me on, so it wasn't until I came across "The Leafs Can't Hit the Broad Side of a Fucking Barn" did I know I hit the seam.

So, the Leafs can't hit the broad side of a fucking barn and doesn't newly minted Vezina trophy candidate Jeff Deslauriers know it? Deslauriers, yet another average NHL goalie who gets the once a season treat of having his stats inflated at the Leafs expense, coasted to the win at Rexall Place for once not disappointing his parents. I'm not sure about you but I am sick to death of the Leafs making their opponents' 'Goalie of the Future' look like their 'Goalie of the Present'.

Remember the good old days when all we had to fuss about was Jason "I Hate Logos" Blake making sure he ruined the very center of a goalies' jersey with yucky black puck marks? Well the Leafs have decided to be the bane of a different team employee; going from the guy who does the teams laundry to the guy who paints the end boards at the end of the season. 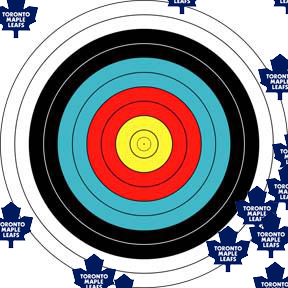 On an interesting side note, this was going to be a post about how much I hate Vesa Toskala, but I found that typing is hard to do with clenched fists. I learned early on in life that anger is something which needs to be expressed, and not buried deep, deep, deep  inside, so I promise I'll talk about this black hole in my heart the next time Vesa Toskala is inextricably given the start in another Leafs game. Until then I want to wish Joey MacDonald all the best for the new year.