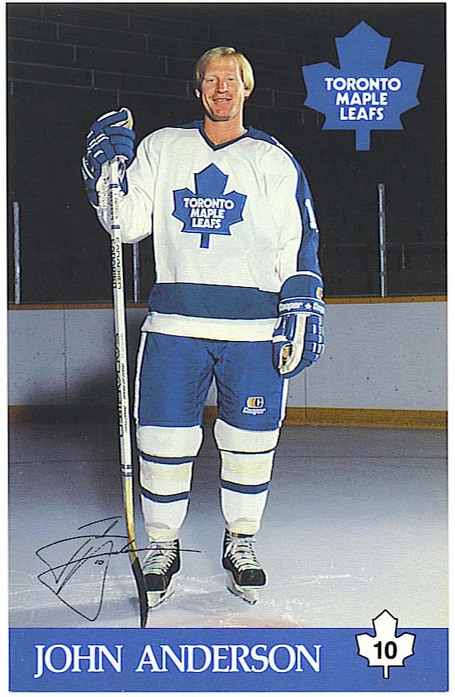 John (and draft-mate Trevor Johansen) is often cited as Exhibit A in the "look who the Leafs took instead of (insert superstar name here" department.  This is severely unfair, since it's not so much that John was a poor pick as it was that Mike Bossy was a spectacular pick.  It's also interesting that every other team that chose someone other than Mike Bossy gets a pass on this and it's only an indictment of the Leafs but I digress.

John was an outstanding junior and a very good NHLer.  A winger with good size and hands, he was a big scorer every year he played.  He was a Memorial Cup All-Star as a sophmore player, the Ontario league scoring leader and first-team all-star in his draft year, and he tore apart the World Juniors with 10 goals and 5 assists in 7 games.  Despite this, he was only rated the #8 prospect out of Ontario (Bossy was #3 from the Q).  Still, he was a very solid pick at #11.

The problem, I guess, is that it took him a couple of years to get out of the gate while Bossy was scoring a mile a minute right from the start.  John also never quite had Brian Trottier feeding him the puck.

One he did get going, though, he was a very solid contributor.  By the mid-80's he was on the left side of the Leafs' number one line (with vaive and Derlago), could score 30+ goals with regularity and had 80 points in 1982-83.

Sort of like now, the Leafs' top-line players were routinely criticized in the papers (by Ballard, more often than not).  This was perhaps never moreso than in '84-85, when the losing hit its peak.  That season, John had his fourth-straight 30-goal campaign, but would be sent in late summer to the Nordiques for Brad Maxwell.  (Derlago would only last one more game before being dispatched as well.)

John didn't put up a ton of points in Quebec in the part season he was there, but took off in Hartford before injuries began to slow him down.

It's funny how it works out and just goes to show how fine the lines can be between players.  In 1977, you had two players go in the mid-to later parts of the first round.  They're both junior all-stars, but neither is rated as the top prospect out of his league.  One goes on to become a very solid B-list winger with an 800-game career, the other is perhaps the best sniper of his generation.

It's a game of inches. 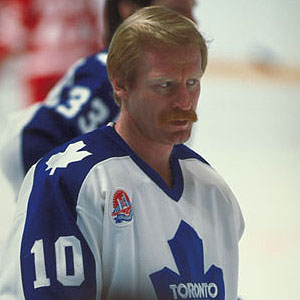 Too bad Movember is done - via www.legendsofhockey.net


the HHOF take on John:

"At 16, he was playing with the Toronto Marlies, and two years later he was the team captain. But on the day he turned 18, he became part of the controversy that was the standard players contract for the OHA.

With the arrival of the WHA in 1972 as a new professional league, teenagers could now sign a contract at age 18, though the NHL didn't draft players until 20. Anderson, like teammate John Tonelli the previous week in March 1975, retired from the OHA rather than risk continuing his amateur career under the OHA's contract which bound a player to that amateur team. However, Anderson didn't receive an offer from the WHA immediately and returned to the Marlies and lead them to the Memorial Cup.

Drafted 11th overall by his dream team Leafs, he matured slowly. But by his third year he was a star of the new Kid Line featuring Laurie Boschman and Rocky Saganiuk, though the next year, 1980-81, he called them the Skid Line for their poor season. Later in his Leaf career he played with Bill Derlago and Rick Vaive, again the team's top line, but after four consecutive 30-goal seasons he felt it was time to move on.

A trade sent him to Quebec and another to Hartford, and he spent the last five years of his playing life in the minors, the last two as player/assistant coach for the San Diego Gulls. In 1995, he became head coach of Winston-Salem in the Southern Hockey League, and a year later he coached the Quad City Mallards of the Colonial League to a championship. After one season in Quad City, Anderson became the head coach of the Chicago Wolves in 1997-98 and went on to jlead the Wolves to the Turner Cup title and two years later the franchises first Calder Cup." 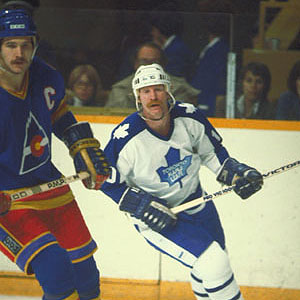 Look - it's the Rockies!  - via www.legendsofhockey.net