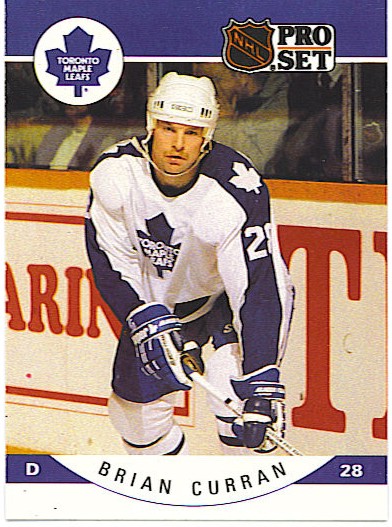 John Brophy always liked to have a bunch of tough guys in his lineup, so it really wasn't a surprise that the Leafs picked up Brian Curran near the 1988 deadline.  Curran had put up 350+ minutes with the Islanders a season earlier but hadn't played a ton in '87-88 because he'd broken his jaw.  It only took a sixth-rounder to pry him loose.

The surprise wasn't that Curran could bring the crazy - it was that he could actually play.

Brian wasn't a guy who ever really drew top-pairing minutes, but it wasn't scary to watch him out there.  He could play some of the lesser minutes, but didn't have to be buried or stapled to the bench whenever things actually mattered.

In the Norris of the late 80s, he was a pretty useful addition that way.

His best Leaf year was '89-90.  As one of the rare defensive defensemen on that team, he still put up a career high 11 points, a reasonable plus/minus and 300-odd minutes in the box for good measure.

In '90-91, he was part of the great purge, leaving for Buffalo with Lou Franceschetti for Mike Foligno.  This also made him a rarity in that the Leafs arguably got the better of both deals - the one on the way in and the one on the way out. 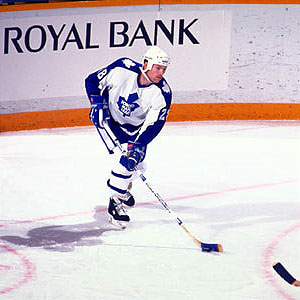 via www.legendsofhockey.net
Would have been nice to have found an Islander fight, but alas....


the HHOF take on Brian:

"The Boston Bruins selected Brian Curran with their second pick, 22nd overall, in the 1982 Entry Draft, impressed by the hulking defenseman's ability to crunch opposing players while he was a member of the WHL's Portland Winter Hawks.

Curran played three years with Portland and was certainly never confused for being the second coming of Bobby Orr. He made it as far as he did through toughness and commitment to defensive play, as was evidenced by his five goals in 166 games. During his final year with the Winter Hawks in 1983, the club won the Memorial Cup championship. Others on that championship team included Cam Neely, Ray Ferraro, and Ken Yaremchuk with former Boston Bruins star Ken Hodge coaching the team.

In 1983-84, Curran played in 16 games with the Bruins, picking up a goal and an assist. The following year he played in 56 games, with the most notable stat being his 158 penalty minutes. He topped that the following season, collecting 192 minutes in just 43 games, a good portion of which came in games against the division rival Montreal Canadiens, and specifically fights with Habs' tough guy Chris Nilan.

In 1986-87, Curran moved on to the New York Islanders, where he continued to show an interest in the penalty box, amassing 356 minutes in 68 games. After 22 games into the 1987-88 season, Curran was traded to the Toronto Maple Leafs. In two years with Toronto he had three goals and almost 500 minutes in penalties. Members of the Leafs called him "Colonel" for all his verbal on-ice orders. Opponents often used somewhat less complimentary words when describing him.

Curran also made brief NHL stops with the Buffalo Sabres and the Washington Capitals, where his NHL career came to an end in 1994. He continued to play professional hockey in the minors until 1998.

Although he fought on a regular basis, Curran also missed plenty of playing time due to injuries, most of which were sustained in fights, including two broken jaws and a broken nose. Following his playing career, Curran got into coaching and was the head man with Jacksonville of the ECHL in 1998-99 and the Monroe Moccasins of the WPHL in 1999-00." 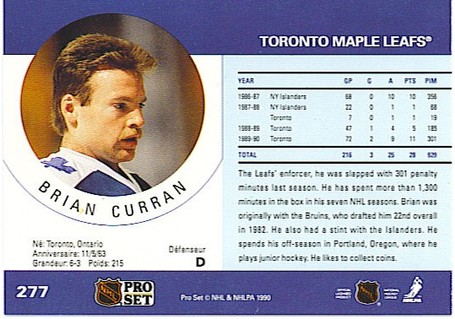