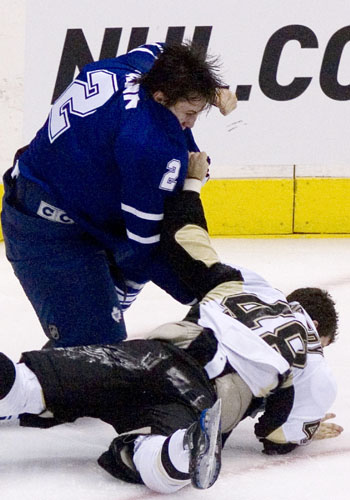 Luke Schenn's fists are named Truth and Justice.
That's Truth about to explain his greatness.

Last night was...I don't know...magical? I don't know if that was the right word but when Luke Schenn's number 2 gets honoured sometime in 2032 that shift will be in his tribute video. As much as some might not like fighting if your heart wasn't racing when Schenn took off his helmet (out of fear at first) then you don't have a pulse.

I've obviously watched a number of Schenn's YouTube videos in order to remind myself that the depths of this season are only temporary. One thing that is clear is how much stronger he was than his peers. He would throw them into the boards with the kinds of hits that make forwards reticent to come down the ice. Last night featured two of them from Schenn including this beauty that sparked a donnybrook:

The Gilmour tribute was predictably amazing as was the crowd's reaction. Once again the Leafs came out strong on the night of a jersey honouring and they almost threw it away again mostly because of Vesa Toskala's horrific play. In the third he allowed three goals on four shots. Read that again and try not to get upset. Of course, this time the Leafs did right by their former captain rather than throwing away a 3-0 lead like they did when Chemmy and I went to Wendel Night.

Speaking of Wendel, when Schenn sat on Kennedy and pounded away did everyone have flashbacks to Wendel Clark? Yeah, me too.

Jason Blake also continued his run of hot play. Last night's game winner was his 10th goal in the Leafs' last 14 games. That's an Ovechkin-like run at a pretty opportune time. There are only 32 days until the trade deadline. You have to wonder not only if Blake is just in a hot streak or if he's found his form from two seasons ago but also if a GM might see his play and think he could help them in the playoffs. Maybe a team like Vancouver that could use some offence!

The Penguins don't need offence but wouldn't it be shocking to see them miss the playoffs despite having the league's top two scorers?

Those 53 points are good enough for 10th in the conference with more games played than the teams ahead of them. It'll be interesting to see if they make any moves at the deadline again this year.

So the Leafs pick up a second straight win which isn't the greatest thing since it's bumped them up to seventh last but last night was a night where a win was a necessity. We'll see where they lie come the trade deadline when they are hopefully weakened.