Negative Nancy Notebook: Our Luke, Who Art in Toronto...

Share All sharing options for: Negative Nancy Notebook: Our Luke, Who Art in Toronto... 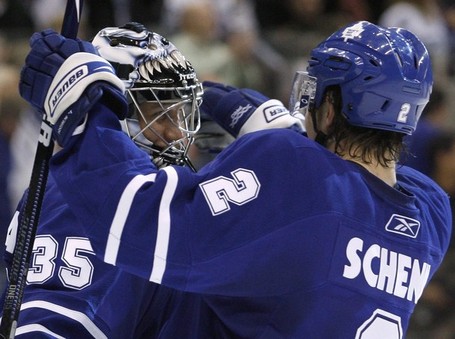 Our Luke and Saviour pardons a sinner after last night's game

On a night when the Maple Leafs feted Doug (Killer) Gilmour and in a season when Wendel Clark was accorded the same honour, it was not difficult to imagine rookie Luke Schenn one day earning fan adoration similar to what those Toronto icons enjoyed here.

Perhaps he'll even follow in their skate strides as the eventual captain in Toronto.

Ummm...perhapts? Your lack of faith is disturbing.

And that's left the sense among his teammates that, as good as Schenn was last night, it's only a hint of what he is going to become.

Let's not get ahe...screw it...let's get ahead of ourselves! Pronger-like size with a Care Bear heart and Lidstrom-like poise on the puck? Let's start polishing that plaque down on Front. Street.

"I was on my way to the (Leaf) bench but he kind of bumped into me ... and he said, `You can't treat our players like that,'" Schenn said. "One thing led to another and then we (were fighting)."

Luke Schenn: teaching jobbers respect since 2008. His pupil last night is likely to face some sort of league discipline considering he was so eager for a beating that he ran off of the bench:

According to the Leafs, Kennedy also instigated the ensuing fight, which saw Schenn twice topple the Pittsburgh centre. Both acts, should the NHL decide in Toronto's favour, are punishable and could net Kennedy as much as a 10-game suspension.

Hopefully we'll see justice served. Can't have scrubs trying to go after the stars of the league because they don't like body checks. Speaking of jobbers:

Luke Schenn is a jerkoff as far as we're concerned.

Penguins fans are getting a little bitter now that their years of actual tanking don't seem to be paying off as they expected.

The Penguins should not have lost to the Toronto Maple Leafs.  No ifs, ands, or buts about it.  A Penguins team that came out of the All Star Break with their eyes on the prize should not lose to the Toronto Maple Leafs.  Yes, they lost to the Devils last night, but New Jersey is red-hot and the Penguins still got a point out of the game.  What did they get out of this game?  Shattered momentum and solidly sitting out of playoff contention.  Are they out for good?  Of course not...but results like this doesn't give room to much optimism.

Maybe he forgot about the curb-stomping that the Leafs' dished out the last time these two teams met.