Share All sharing options for: Groundhog Day: Leafs 4 at Panthers 5 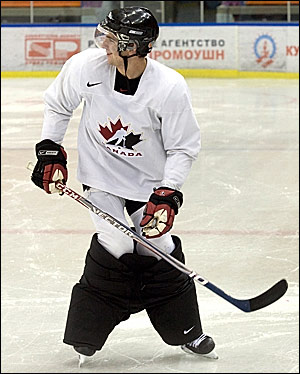 Tavares is so excited he can barely keep his pants on

I'm tired of writing the same recap about the Leafs starting off great and blowing it. I've decided to make a template for future OT losses that started out as 4-1 leads, if only to invoke the corollary to Murphy's Law, which you can all refer to as "PPP's Law". Allow me to explain. In common usage Murphy's Law says that "whatever can go wrong will go wrong". PPP's Law is the opposite, if you're prepared for the worst it will still happen. Did you just buy a snowblower? Enjoy a winter where it never rises above 0 degrees! Hopefully by creating this template and invoking my own law, we can hasten similar mishaps in the future.

The <team who scored first> opened up their scoring at <time of first goal> with a <adjective describing first goal> goal from <adverb describing quality of goal scorer's recent player> <verb> <first goal scorer>. The <team, probably Toronto> rode out to a <score that the team blew> lead in the <period of lead>.

That's actually kind of tiring and had the added benefit of being boring. Hmm. I'm going to start over. Spurred on by Nik Hagman once again terrorising his former team the Leafs built a 3-1 lead heading into the third period. They call a two goal lead the most dangerous lead in hockey. "They" are pretty dumb because it's clearly the one goal lead. However, the Leafs have found a truly dangerous lead: the three goal lead.

It's a rare animal in these parts but vicious nonetheless. It's small enough to be overcome but large enough to force the hunter to need extra time to slay it.

I also liked that instead of former Leafs always burying Toronto, our players have been burying their former teams of late. Blake had that great game against the Islanders, Finger scored on Raycroft, and ex-Panther Nik Hagman scored two more against Florida. Success!

As usual though the third period was a complete trainwreck. After Antropov seemingly sealed the deal with his fourth goal in six games the wheels came off. The Panthers scored on the next shift off a ridiculous carom off the end boards and with almost 12 minutes left you knew where this one was going. Sadly the Panthers couldn't quite seal it. The Leafs did continue to give the Panthers more gifts. In their first meeting they gave Vokoun his 200th win, in their last they gave McCabe the game winner, and last night they let Richard "OH GOD MY NECK!" Zednik score the overtime winner. That kind of good karma will hopefully make the lottery go our way.