One Point Farther Away From Tavares

Share All sharing options for: One Point Farther Away From Tavares 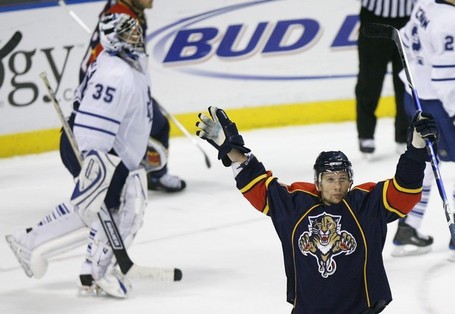 It took two and a half periods, but they finally showed up. The Cats destroyed a 4-1 deficit, clawing their way into contention with barely 10 minutes remaining in regulation, with Richard Zednik (2 goals, one of the NHL's three stars of the night)sealing the deal in overtime. What a story. - Litter Box Cats

"In hindsight, my motivational pre-game locker room speech to "get out there and play a full 50 minutes" may have been a mistake." That's ok, it happens to the best of us I guess. It also happens to the Leafs, who are fantastically good at blowing leads.

On the one-year anniversary of one of the most gruesome accidents in hockey history, Richard Zednik had to be the hero Tuesday night. - The Miami Herald

Interesting milestone? Check. When I heard last night that it was the one year anniversary of Zednik's neck explosion I knew for a fact he'd score the game winner. Is Tavares going to wear 19 when he gets here? Will he have to fight Dominic Moore for it?

Florida rallied from a 3-1 third-period deficit to beat the Leafs last Tuesday in Toronto; this time, the Panthers came back from a 4-1 hole thanks to three unanswered goals in the final 12 minutes. Zednik's second of the night came in overtime, Florida's fourth consecutive goal.

The Panthers have won two games this season when trailing going into the third. Both have come in the past week, both against the Leafs. According to the Elias Sports Bureau, the Panthers had never won a game after trailing by three goals in the the third period.

Oh, more milestones. I have an idea, I'm going to bet that in Thursday's game Vincent Lecavalier can't score 12 goals in one period playing with the wrong handed stick because all of his got lost in a comical shipping accident. Then I'm going to call the Elias Sports Bureau and ask if that ever happened before against the Leafs, and have them print that it hasn't. To quote Kevin Garnett "Anything is possible".

The huge scar on his neck was still there, but all you noticed when you looked at Richard Zednik after Tuesday's improbable comeback win was the smile stuck on his face. - South Florida Sun-Sentinel.

That smile was actually stuck on with 2,400 stitches after Richard Zednik got drunk and tried to french kiss a deli slicer.

Dark night? In February? I'm pretty sure that Miami Florida is contained within the Antarctic Circle meaning that the sun shines 24 hours a day. Who writes this crap?

Oh. I like how his tagline is "Hockey Columnist". Wow, check out this great hockey column. Who could have written a hockey column as good as this? Damien Cox? Never heard of him wonder what his job is... oh. Hockey columnist eh?