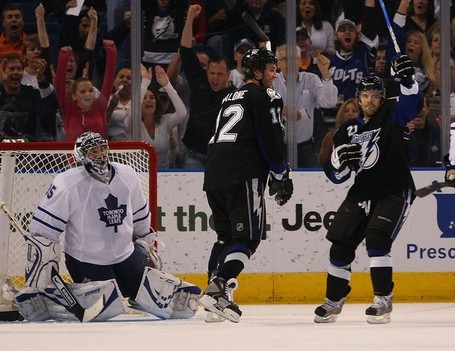 No one wrote anything remotely interesting about last night's game, so I present the following comment to you. Who wrote this? What is going on at this blog?

I have a better joke about Tampa Bay. The team's attendance numbers are in a complete free fall and they might have the worst ownership group in hockey. Enjoy watching your Oklahoma Lightning on Center Ice in two years.

It's not the only completely bizarre comment over there either, check this one out:

Was this written by Mr. Magoo? Does the author know the "n" and "r" are different letters? They're not close to each other on the keyboard, nor do they look similar as capital letters (how they'd be printed on a keyboard) WHAT IS GOING ON? You know what? Forget it. Let's just pretend we never read anything from Florida and go back to hating on the Star.

Ugly road trip? If the Leafs had beaten the Panthers and Lightning 400-0 in each game the Star would helpfully inform us that the Leafs still suck, and all of you are dumb for being happy about it. If the Leafs had picked up four points the Star would let us all know on draft day that the Leafs late season surge was all for naught and ruined their chance at rebuilding. Honestly the only chance the Leafs have is to score so many goals in a single game that the league as a whole decides to immediately award them the Stanley Cup, and even then Damien Cox would tell us all that they got lucky.

Stamkos's seventh goal was a wrist shot from 35 feet that Leaf backup netminder Curtis Joseph should have had in his first appearance in more than a month, but the former Sarnia junior also had two emphatic solo dashes to the net in which he nearly scored.

On the basis of last night, the words of ex-Tampa coach Barry Melrose that Stamkos wasn't ready for the NHL may have been a little hasty.

I want to preface the following by saying that Barry Melrose is to NHL coaches as Mike Milbury is to NHL GMs. Filatov has four goals in eight games with Columbus. Mikkel Boedker has nine goals with Phoenix.

Sure, seven goals in the NHL for a young kid isn't bad, but to act like Stamkos getting on pace to score 10 goals in the NHL means that Barry Melrose was wrong is ludicrous - the kid could obviously use some more seasoning.

Enjoy the win Tampa, you're only a point ahead of Toronto in the Treasure Hunt for Tavares or Hedman.