Kick 'Em When They're Down

Share All sharing options for: Kick 'Em When They're Down 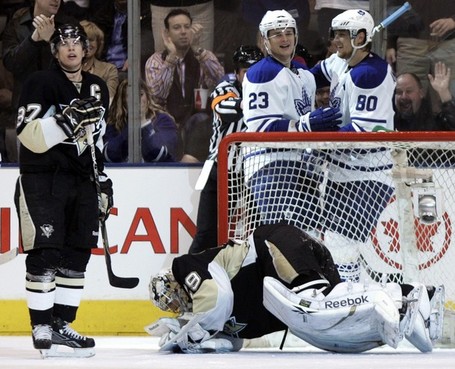 Want to know why getting Tavares won't singlehandedly save the franchise? You need to have depth. If Tavares is as good as Malkin or Crosby that would be insane, and yet with both of those superstar players the Penguins sit one spot ahead of Toronto in the east.

The Pittsburgh Post-Gazette found a way to concisely state the Penguins' sense of entitlement:

If they want to make the playoffs, they can't allow a 2-0 lead against a weak team to mutate into a 6-2 loss, as happened in Toronto Saturday night.

The Penguins are in tenth place in the East. The "weak" Maple Leafs are in eleventh. Are the Maple Leafs a good team? Of course not, but looking at Pittsburgh I'm not sure they're a team that should call anyone weak at this point.

"We got caught in a situation against Toronto a couple of times where we've taken it for granted," Cooke said.

Something that's sort of overlooked is that Ron Wilson's Leafs squads do very well in games where the other team comes out flat. If a more talented team (which probably includes 25 teams if we're comparing them to Toronto) comes out and works even half as hard as the Leafs, the results are predictable, but every time a team comes out to beat the bottom dwelling Leafs they get pasted.

Where are our Penguins fans? That's the only thing I can leave this post off with. I'm ashamed, I'm stricken...I just don't understand...We lose, we win as a team...Period. That's it. Hmm, but for some odd reason, everybody just LOVED the Pens last year?? And one loss makes us the worst team ever....I'm sad.