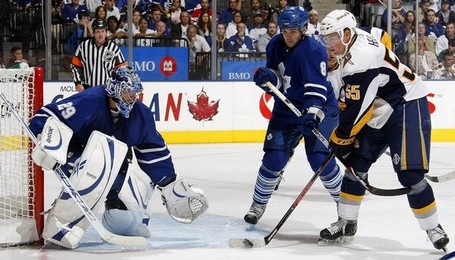 Justin Pogge's getting the nod tonight. After a solid effort by the boys against Pittsburgh on Saturday night, hopefully the Leafs can put together a halfway competent defensive effort in front of the kid, unlike his last two starts where the Leafs absolutely hung Pogge out to dry. He'll see the Sabres for the third time this year, playing them once in the preseason and once in Buffalo with an 0-2 record.

Previous matchups between the teams:

That's pretty ugly actually, the Leafs are averaging 1.00 goals per game against the Sabres right now, yet actually have a win. Taking two points from Buffalo tonight would even the season series between the clubs and bring Pogge back to .500.

Things I'd like to see from the Leafs tonight:

The Leafs are without two key defensive contributors, but the Sabres are without Thomas Vanek, 5th in the NHL with 32 goals scored. Die by the Blade suggests that the Leafs might see Patrick Lalime instead of Ryan Miller.

The pieces are in place for a great game tonight, let's hope it's a good one for PPP who will be in attendance. Go Leafs go!