Share All sharing options for: Let's Talk About Pogge 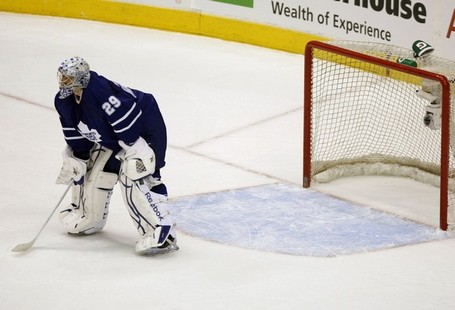 Here are all four games Justin Pogge has played in the NHL:

That's an ugly stat line, but let's dig a little deeper. In his one win, Pogge ditched his shutout bid when he let in a Colby Armstrong wrister from the circle that he should have had, but was solid otherwise. In the 6-1 Minnesota Massacre, Pogge was very solid but got absolutely no help from his defensemen. That and the 5-0 Buffalo thumping Pogge played in were the two worst defensive games I've seen the Leafs play this season. The Leafs are also averaging just 0.66 goals per game in Pogge's three losses.

In last night's game the first goal was scored stick side on Pogge who was hugging his stick side post. It was a brutal giveaway by the Leafs from behind their net which doesn't excuse the fact that it's a save Pogge has to make.

Buffalo then scored on a nice cross crease passing play which should have been defended by Kubina, before Matt Ellis took a shot from the goal line ten feet out to Pogge's left which seemed to catch Pogge's pad and go in the net. Flukey goal but Pogge has to have that. It should also be noted the Frogren had a terrible turnover to give Ellis the biscuit. Shortly thereafter, it appeared Buffalo had scored again, but the goal was waived off as the referees decreed that the Sabres' player had directed it in intentionally with his elbow.

Down 3-0 after the first, Pogge was very solid in the second. He made two good pokechecks to takeaway scoring chances, stopped 13 shots and helped the Leafs kill off two penalties in the frame. Pogge then came out for the third where he made eight saves, allowing only a power play goal.

Aside from the first period of last night's game, I think Pogge has looked good behind the Leafs' terrible defense. Both of his soft goals last night came directly after the Leafs D coughed up the puck in embarassing fashion in the first period. Could it be a case of nerves? Did Pogge have a hard time getting settled for his first regular season home game at the ACC?

To be honest, I think the jury's still out on Pogge, but that's ok; he's a young kid. He still makes rookie mistakes like being too far back in the crease and letting in some dumb goals but he rebounded nicely last night in the last two periods. He also made a number of saves in the Buffalo and Minnesota blowouts that no goalie has any business making.

Let's give Pogge some time, if he settles down out there he could still be a real gem, current performance not withstanding.