Share All sharing options for: Maple Leafs 1 Sabres 4: End of the World

Well that game was all that I imagined that it would be when I agreed to go see it. Dinner at The Keg was fantastic as usual and the company was hilarious but I knew the game would be terrible. Sure Pogge was getting his first start at home but the Sabres notoriously have the Leafs' number. They are 4-7-2 since the lockout at home against the ficklest fanbase and my personal history is just as bad. I've probably seen the Sabres more often than any other team besides the Bruins and the best result may have been a tie when I was seven. Anyway, I knew what I was getting into but I am not so sure that Justin Pogge felt the same way.

Chemmy did a good job of explaining why it doesn't make sense to panic on Pogge yet, you can go to Steve's Leafs' site to get blow-by-blow statistics that show that we shouldn't be jumping off of the Bloor Viaduct anytime soon, or take MF37's advice and remember that it's been 4 games. Not 4-0. Just 4. Better yet, let's look at some soothing visuals: 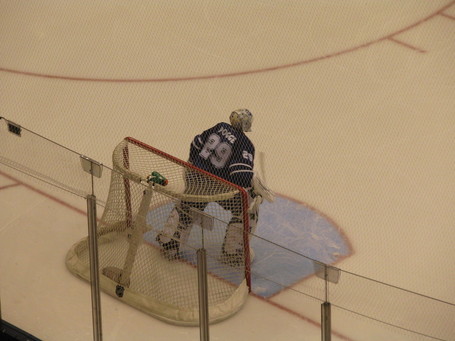 Doesn't he just look like a franchise goalie about to stalk out of the net to face down the opposition shooters and laugh at their feeble attempts to beat him?

Oh, look at how smooth and nonchalant that glove save was in the second period.

One thing I do know is that Rosie DiManno is dumb. Just as a refresher, here she is saying how Antropov loves Toronto because fans are just so darn nice. Or are we so mean that Dave Perkins had to beg us to not give Pogge a sarcastic cheer on every save?

It didn't take Justin Pogge long to find out that Maple Leaf fans are more than willing to eat their young.

To be fair, a lot of the best foods are young: Veal (baby), carrots (baby cut), eggs (pre-baby), or baby (Irish Satire). While Perkins is apparently stunned at the fans of a team that will miss the playoffs for the fourth straight season and haven't won a championship in almost half a century booing Justin Pogge seems to have a pretty good grasp on the issue:

"I guess I deserved it. You've got to keep your head down and keep playing," he said, adding hopefully, "it can only make you better."

Of course, Matt Stajan doesn't seem to understand why those of us that were unlucky enough to have paid to see the game (full disclosure...I didn't pay) would be upset at seeing three goals on the first 6 shots on the Leafs' net. I hate to say this but it's a classic example of why guys like Tucker and Raycroft had to go.

The comments on that article delve into the ridiculous as the anti-Leaf brigade (and sometimes people that don't even like hockey) try to explain why the current situation is all our fault as fans. Sure, most of those people don't follow hockey or can't scratch their nose because their knuckles are scraping along the ground but they do ask some good questions: Are we to blame for making life too tough on players to develop? Or is it our fault that players get way too comfortable? Or are we ungrateful bastards that make this city undesirable for players? Or does the team suck because we buy tickets to support our team? It's all very complicated but thankfully we have people that troll out-of-town papers to explain that we actually hate hockey.

Now, the seats that I get through my uncle and his friends are conveniently located next to the Molson Best Seats in the House. This means that I get to check out the server (always good looking) and the televisions (that's how I got to see Canada versus Russia in the WJHC). Most of the time the lucky bastards get all that they can eat and drink and they have a hell of a time. These four guys probably drank as much as I have ever seen and the poor server was a bit too good looking for at least one of their party to restrain himself. He's not a bad dancer but picture this with one leg up on the railing and some pelvic thrusts and it's still not as traumatic as it must have been for the server:

I wonder what Brian Burke and the Silver Fox thought of that display? 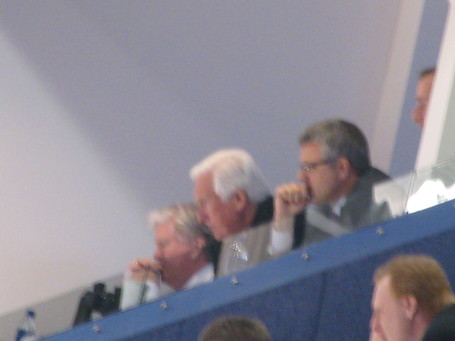 Alright, maybe I had a wobbly pop or two...

Under that withering glance those guys left with about 18 minutes left in the third period. Maybe it had something to do with the fact that they stopped serving beer.