Share All sharing options for: Blue Jackets at Maple Leafs 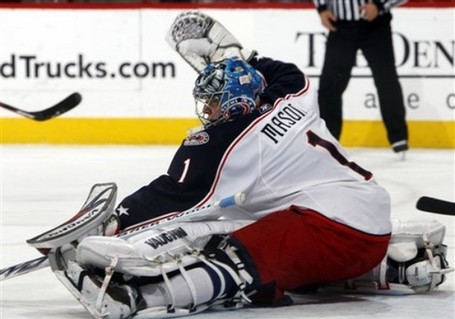 Stevie Franchise is coming to town with stats like this:

Clearly the Leafs have their work cut out for them. 200 feet away from Steve Mason will be Leafs' rookie goaltender Justin Pogge:

Assuming both goalies tonight don't change their save percentages, and that the Blue Jackets can get 30 shots on net, the Leafs will have to put sixty four pucks on net to make it a tie game (5-5, ugh). That's the difference between a .923 goalie and a .837 goalie. Somewhat luckily, the Blue Jackets don't have a lot of offense, and they play a very stifling style under Ken Hitchcock. The Leafs have 172 goals for and 210 goals against this season, compared to Columbus' 159 goals for and 161 goals against.

Players to watch out for:

There's nothing like playing the Maple Leafs to help other teams set records, so buy yourself a two four before the game tonight, because Ken Hitchcock is coming to the ACC with 499 career wins.

The Blue Jackets are in the middle of a playoff hunt in the Western Conference. With a Vancouver loss to Ottawa tonight and a Blue Jackets win, Columbus could move into 5th place in the West. I hate to be the bearer of bad news but especially with Pogge in net tonight this is probably going to be an ugly game.

Hopefully Pogge can shake off his mental errors in the first period of the Sabres game and come out playing well from the get go. This is either an extended audition to see if he can settle down and play well or a stopgap measure while surgeons dissect Toskala's destroyed groin, but either way it would be nice to see Pogge steal a game.