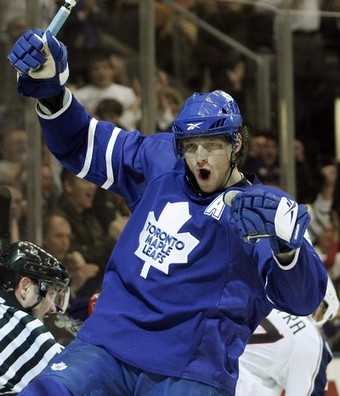 I am a massive fan of Nikolai Antropov. It is definitely not a secret and I don't think that anyone that has ever visited this site would have been left wondering my favourite Leaf. I waited so long for Antropov to develop and put his physical tools together. He started with a great run with Poni and the Leafs' previous captain after the Olympics and almost helped steer the Leafs to the playoffs. He had his 'breakout' season last year as he showed that not only had he learned to use his size but he show the durability that had always been questioned. This year has been more of the same.

Antro is not a first line player, 0.73 points per game over the last three seasons testifies to that fact, but he is definitely a top six forward. He probably has the best hand eye coordination I have seen His second goal tonight was a testament to the long hours he puts into honing that skill. He is not the fastest skater but he uses his massive 6'6" frame to great effect. Did I say that already? Anyway, the point is that Antropov certainly has a place on the Leafs going forward. However, there is a top end of the pay scale that he should not be passing. When I hear rumours of 5 year deals for $5M per year I think it's probably wise to start coming to terms with his imminent departure and it's really a shame.

Like Ponikarovsky, he won't get the appreciation he deserves because of the jersey he wears. It's a shame because he has never backed down. Rosie DiManno wants to pretend that this city is an easy one to play in? Well she should have asked him if he remembered hearing his name cheered when it was announced that he was a scratch. You want to talk determination? Antropov personifies it and it'll be a shame to see him leave but as we've learned over the past year it's that there is only one constant in sports: the crest.

The good news from last night's game, aside from Antropov continuing his resurgence as he seeks to prove that he deserves to remain in Toronto, was Pogge's return. The first goal saw him a little too deep but he looked solid throughout. There are obviously things that he needs to work on still, rebound control being the main one,  but the fact that he rebounded two days after getting heckled at home is a heartening event.

The biggest difference in this game? The Leafs actually showed up. To be fair to the Blue Jackets they were playing their fifth game in seven days so it's no surprise that the Leafs were the agressors. Aside from a collective brainfart on the first goal (nice to see Finger acknowledge his error) and everyone taking a nap on the third goal they played a solid defensive game and it allowed Pogge to show what he could do. Wilson alluded to it after the game when he makes comments to the effect that they were not going to bring up Pogge to get shelled. He said that he believed that Pogge can be a successful goalie behind a good team and that is the plan for the Leafs: to be a good team.

There were a couple of major incidents. The first was a filthy hit by Raffi Torres. It was late and he clearly lifted his shoulder to hit Jamie Sifers in the chin in an attempt to injure him. I hope that Burke sends the tape to the league because it is exactly the kind of hit that needs to be punished. Jared Boll then hit Justin Pogge. Then Our Luke and Saviour stepped in to teach him a lesson. 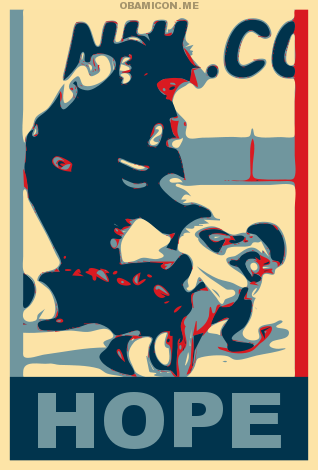 You could see Burke standing in the gondola enraged at the offence but pleased with Schenn's reaction. The "attaboy" was clear. Each game it becomes clearer and clearer what a gem the Leafs have on their hands.

As for the shootout, well, I'll post video when I can but anyone that saw the game knows the major talking point: Lee Stempniak hit rock bottom in this game. He fanned and let the puck dribble into the corner. Pogge struggled when Williams lost control of the puck. Having scored on a similar play I know that it can really throw a goalie off. Jason Blake kept on keeping on with a bullet shot over Mason's glove.

So Ken Hitchcock earns his 500th career win which a certain handsome fellow anticipated and Mason, in front of 50 friends and family, picked up the win. Quel surprise.