Editor's Note: Eyebeleaf of the excellent Sports and the City is here to implore everyone to forgive and forget right now. Don't forget to check out his montage of Sundin images. Without further ado... 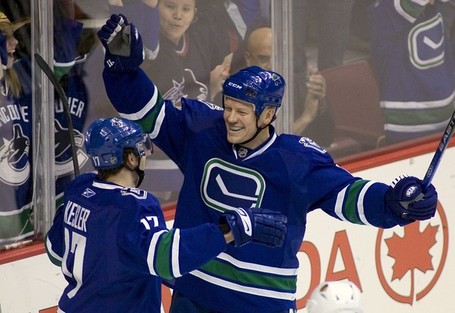 He's back. As a visitor. As a Vancouver Canuck. As the opposition. As the enemy. But he's back. Home. Where he grew up. Where he became a man. And I can't help but welcome him with open arms.

To be honest with you, it's tough to write this post. I'm not sure I truly believed I'd ever see Sundin on the ice at the Air Canada Centre in anything but a Leafs uniform. But, here he is.

Oddly enough, it's The Hangar's 10th anniversary tonight. Remember, it was Sundin who carried the torch - the "Memories and Dreams" - through the streets of Toronto, over to Bay and Front. He wasn't able to lead us to the "dream," but he sure left behind classic "memories."

Those memories are the reason why I'll be on my feet in applause, at the Air Canada Centre in attendance, when Sundin takes to the ice tonight. Logo on the front of his jersey be damned. After all he did wearing the blue and white, it's my turn to say thanks to the name on the back of his sweater.

There are those who cannot forgive Sundin for the way his tenure in Toronto ended. It remains an issue that sharply divides what is normally one tight-knit family of Toronto Maple Leafs supporters.

To those who say that Sundin lied about not wanting to be a rental player, and lied about wanting to respect the "journey" that is a full NHL season, I say no, he didn't lie. Not to me, at least.

Things changed. Situations changed. Yes, I am on the same page as Damien Cox on this issue. It pains me, but it is what it is.

In my heart, I believe that Sundin was set to retire back in August. He had all but hung up his skates for good. I truly believe that if Sundin knew in June that he was coming back for another season, he would have signed a deal with the Montreal Canadiens before July 1st, thereby ensuring that the Leafs at least received some compensation for his rights.

Sundin's decision to not join an attack as potent as the Habs' was a sure-fire sign to me that he thought he'd left the game behind.

While it may be hard to believe when looking at the standings today, I think most of us would have to agree that Montreal looked more like a Stanley Cup contender than Vancouver over the summer.

"I was put in a position I didn't want to be in. For me personally, I felt that we still had a chance to make the playoffs (last year). As captain of the team, (I believed) jumping the ship wasn't the right thing to do."

That's the guy, the one who spoke those words, you're going to boo? Seriously? Let me guess, you'd probably boo the captain of the Titanic, for going down with his sinking ship (I think he had a no-trade clause, too).

Don't do it. Don't let an unfortunate ending cloud your judgment. Things end. And they usually end badly. That's why they end. That's life. I ask that you don't forget what Sundin meant to you, to your city, and to your - to our - team. He always played with tremendous passion, desire, motivation, humility, and, above all else, respect. Isn't that all we could have asked for? I believe it's only right that, tonight, we show him that same respect.

Let bygones be bygones. Do the right thing: applaud Mats Sundin. Lord knows he deserves it. For once, ask not what Mats Sundin can do for you - ask what you can do for Mats Sundin.