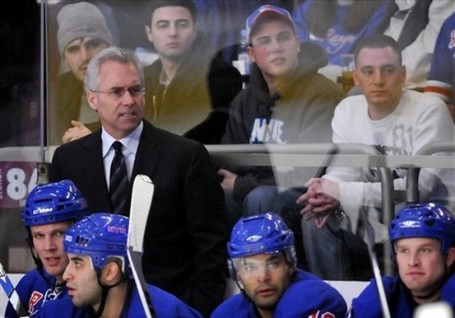 Madison Square Garden did not pass the half-full mark until the ceremony was well under way. And when the current Rangers skated out for their part of the program — including defenseman Michal Rozsival, who gave up his No. 3 as it was retired for Howell — they were booed heartily. - NY Times

The last time I saw MSG half empty was for the second and third period of the 12/06/07 blowout where the Leafs put up a six pack on the Rangers. It was delicious. I particularly enjoyed the Rangers faithful booing every time Wade Redden touched the puck, that will help Redden live his dream of being Daniel Alfredsson and getting booed at home by Toronto fans.

That was why the crowd booed when Rozsival, Chris Drury, Scott Gomez and Markus Naslund were introduced to help carry the banners to be raised.

Ouch. As painful as this first year of rebuilding has been, it could be worse. We could have pretended to be a playoff team and loaded up with expensive free agents who wanted long term contracts. We could be fans of Pittsburgh, Ottawa, or New York, wondering what happened and realizing that there's no way to rebuild with that much salary tied up for that long. Pittsburgh will probably bounce back, the Rangers? Good luck.

Bathgate noted that 45 years ago to the day, the Rangers had traded him to Toronto. “Who am I supposed to cheer for tonight?” he said. “I’m kidding.”

He then went on to say "No seriously, go Leafs go."

The ax fell for Renney the day after the Rangers lost, 3-2, in overtime Sunday night to Toronto, a team not contending for a playoff berth. - NY Times

I wouldn't call what the Rangers are doing "contending for a playoff berth" but to each his own.

Renney has led the Rangers to three straight playoff berths, breaking a nine-year playoff drought for the franchise. But the Rangers did not make it past the second round in any of those three post-seasons.

Three playoff appearances in a row with young kids from the farm team, after nine years of no playoffs PRE-LOCKOUT when the Rangers spent close to $100 million a season to match Toronto, Detroit, and co. I can't even wrap my head around that.

Even dumber, after young kids from the farm team worked so well, the Rangers decided to go back to signing crappy free agents for wheelbarrows full of money.

The big contracts given Redden, Gomez and Drury are giving the Rangers very little room to maneuver under the cap, so big personnel changes are unlikely, even with the trade deadline coming March 4. The team is expected to reacquire Avery when the Dallas Stars put him on re-entry waivers to end his tumultuous season with that club.

I don't even need to write anything else. This is hilarious.