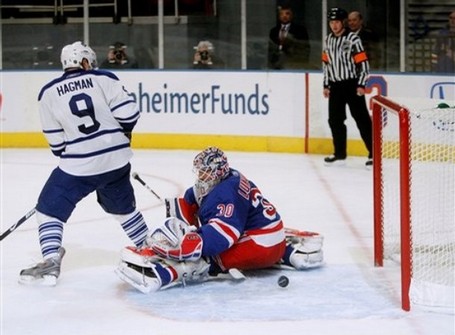 Hot off an overtime win (blerg) the Leafs host the Rangers in the second game of a back to back, before travelling back to New York to play the Islanders tomorrow night. Maybe this home and home should have happened the other way around.

Since Sunday the Rangers canned their coach and brought in John Tortorella who apparently has only run one practice with the team. We should expect to see a very different style of play from Torts' Rangers than Renney's. Torts' motto "Safe is Death" will eventually filter down onto a Ranger team that's been playing defensive hockey for a long time.

Tonight? Anything could happen. Tortorella's unfamiliarity with the team might show through at key junctions and the Leafs might pull out a win (ugh). Or players who have been offensively stifled all season will use the system change in New York to have breakout games and set the tone for the rest of the season. Every other midseason replacement coach whose team went to Europe has lost their first game so with the Leafs' luck I'd expect Tortorella to pick up a win on that fact alone.

Personnel wise Mark Bell got claimed off waivers by the Rangers but won't dress tonight, and Kaberle and Van Ryn remain injured. Vesa Toskala's play has been solid as of late. From Steve:

This leaves me torn. Do I want Toskala to play well? Sure. We need Vesa to play well in net for us but at the same time this season is already lost. The Leafs aren't going to the playoffs so cheering for wins just slows down the rebuild.