Leafs at Islanders: What's a Leafs Fan to Do?

Share All sharing options for: Leafs at Islanders: What's a Leafs Fan to Do? 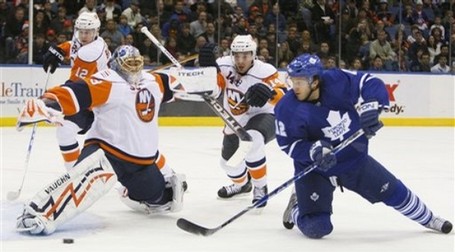 Lee Stempniak shoots and scores on Rick DiPietro while I'm in the parking lot.

The last time I drove to Nassau Coliseum to see the Leafs play it was a disaster.

Stempniak scored just as I arrived, fresh off of sitting in the Lincoln Tunnel for two hours and getting stuck in Manhattan because every single east-west street was closed. I sat down as they were announcing Stempniak's goal and that was the most exciting part of the night. It was also probably the only game Rick Dipietro will play this season, thanks a ton Ricky.

I don't know why I do this to myself, every time I've gone to Long Island the Leafs have lost, but now that we're in full on tank mode I'm willing to take one for the team, literally.

Last season I got to watch Andrew Raycroft blow it in OT and let Mike Comrie score before driving to Philly to watch Raycroft stuff it again the next night. The year before I was at the 4-2 beatdown that effectively ended the Leafs playoff hopes before the Islanders beat the Devils in the shootout to make it official. The Leafs beat the Isles at home once this year, on December 8th:

Jason Blake had a three point night that started his absolutely dominant streak. Let's hope tonight that Blake just needs to travel to Long Island to refuel every so often and to continue producing.

On the injury front, Tim Stapleton will make his Leafs debut tonight, and Anton Stralman also got called up to replace John Mitchell and Jeff Finger who both will be out with "hypothetical possible injuries maybe" according to the NHL's injury reporting policy.

Tomas Kaberle could play tonight but is expected to make his return Saturday night in the City that Fun Forgot, and Mike Van Ryn is apparently close to making a return as well.

Good gravy. At any rate, both teams' fanbases are probably rooting for a loss tonight, so let's get down to business. The Leafs aren't getting John Tavares. The Leafs probably aren't getting Hedman, but that's ok. There's a ton of good players in this draft's first round, and the Leafs just aren't bad enough to be the worst team in the NHL... yet. This year's Islanders squad knew from the beginning that they'd be favorites in the draft lottery and to be honest the Leafs could be in a similar situation next season, hoping to draft Taylor Hall.

So what's a Leafs fan to do? In theory I won't be devastated if they lose, but as a Leafs fan I can't help but want to see them win. The deadline will come and good veterans will be replaced by promising but unseasoned youth as time passes. Missing out on Tavares won't be the end of the world -- but giving up on the Leafs because they don't lose enough or win enough would be.