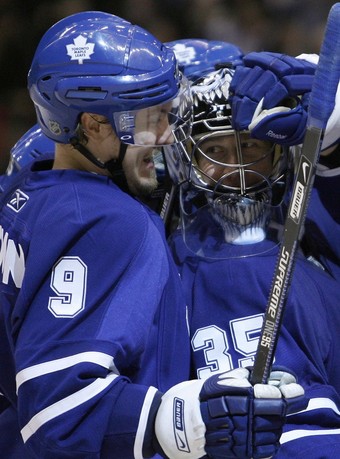 "I've been feeling good all season long," said Toskala. "Nothing has changed. I don't know about my numbers. It's not easy out there every night, but I'm just trying to do my best. I think I've been doing pretty good."

So instead of providing this kind of goaltending all year:

We could have been receiving the kind of professional goaltending that actually costs $4M a year (thanks Fergie). Now, there have been rumours of groin and hip injuries but an MRI last week showed no damage. So what magical formula has turned things around for the Maple Leafs' goaltender? Practice:

"He certainly looks to me like he's a little more aggressive or assertive in net," said Wilson. "He won't admit to it, but a lot of it comes from better practice habits. Digging in in practice, it carries over into the game.

What a novel concept: practice how you play. How did that message get lost? Paul Maurice was supposed to be a real taskmaster during practices. Maybe it was Bryan McCabe telling players to let things go in one ear and out the other. Almost sounds like an indictment of the team's leadership over the past few years. Three down and two to go...

Bob McKenzie might not believe that they are going to be able to move Kubina and Kaberle but it's probably best that they do so as soon as possible. But let's look at something positive:

"Hopefully, our luck continues with another New York team," said Hagman, who notched his 99th career goal after being reunited with Grabovski and Nikolai Kulemin in the third period. Kulemin got the only shootout goal.

Oh isn't that nice! A career milestone is coming up! If Hagman was an opponent he'd notched it in the last minute of regulation against the Leafs (back to negative). He apparently loves the Rangers after getting back-to-back goals against the free-falling team. You know who must hate the Rangers? Glen Sather:

Sather downplayed the situation when asked about Tortorella's reported dislike of Avery on the conference call introducing the new coach.

"I think over time [Tortorella will] learn to love him just like I have," Sather said.

I know that this mystique has grown about Avery's impact on the Rangers but do people forget that Lundqvist probably should have won the Vezina last year? or that they still had Jaromir Jagr? or that Wade Redden hadn't sullied the Rangers' history yet? Tortorella is right not to want that POS on his team especially since I am sure he doesn't want someone that his teammates in Dallas considered too dumb to run drills properly ruining what he is trying to build. Especially since part of it will involve discipline:

"I don't want to jump to conclusions, but I'm a little concerned about the conditioning of the club - I thought we were tired in the third period," the head coach said. "If we're going to play an attack style, we need to be in shape."

His "actual" words were a little less diplomatic. I am guessing that Kyle Wellwood won't be making an appearance on Broadway after completing his flame out in Vancouver.

What did Rangers fans think of the rebirth of their team? Not much:

During the first intermission Pierre McGuire said that New York Ranger fans had to like what they saw in the first period and I know I wasn't all that impressed. I didn't see anything different then what I saw in Sunday's first period. A few players played hard and smart, others played soft and dumb and no one scored. The game went on pretty much just like that and the Rangers again escaped with a point they didn't deserve. Sure they made it past an overtime penalty this time but the three pathetic excuses for shootout attempts washed away any positive from that.

At least there's the chance that Torts will kill a member of the media. That should hold you guys over for now. Or so I have heard.