Return of Toskalol: Leafs 5 Islanders 4 (SO)

Share All sharing options for: Return of Toskalol: Leafs 5 Islanders 4 (SO) 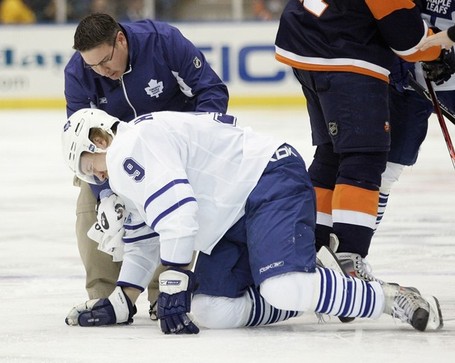 Sadly, the above will be the enduring image from tonight's game. For some reason a ridiculous thought entered Brendan Witt's peanut brain and he decided that the best thing to do after he lost his stick was to throw an elbow at Hagman's head. At what point did he think that it made sense to injure a fellow professional? One can only hope that justice, whether by form of Wheel or karma, will be served.

The Leafs actually played a great game for the most part. Vesa Toskala continued his hot play as he made 40 saves. Of course, of the four that he didn't stop he should have had three of them. The tying goal was classic Toskalol as his glove couldn't handle a simple wrist shot. The enigma that is Toskala brought us the sight of him stopping a penalty shot during regulation and two more breakaways in the shootout which likely increased his save percentage from .050 to .123.

On the offensive side of things Stapleton had an inauspicious debut until he potted the winner in the shootout. Jason Blake continued his strong play and it'll be interesting to see if he can continue this play next year when Dominic Moore is gone. On the back end Luke Schenn has a photogenic behind according to Chemmy's camera: 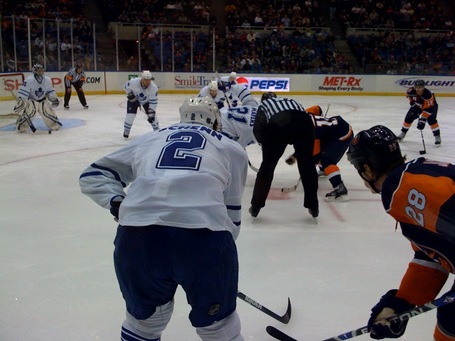 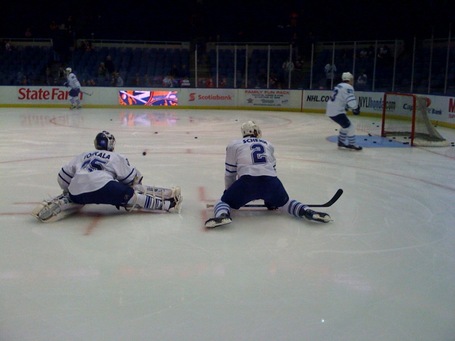 He only played 16:27 tonight which is way off his season average of over 20 minutes. I wonder if Wilson saw something in his game that he wanted to correct because I liked how he was playing. Then again, I don't coach in the NHL. Yet.

On the Islanders' side, Bergenheim has some serious wheels. He swiped a White giveaway and blew past Anton Stralman to draw a penalty shot. In the second period he swiped another White pass and broke in alone (shorthanded again) and potted a beauty. Actually, come to think of it, Ian White had a terrible game despite scoring the opening goal. Ironically, Greg Millen kept talking him up as a potential asset that would be very desireable on deadline day. Wait, is it ironic that Greg Millen said something dumb? No, the word is 'predictable'.

So the Leafs' put even more daylight between themselves and the Islanders and the senators:

Speaking of the senators, thanks to everyone that participated in welcoming Silver Seven Sens by showing them how to best make use of their fanshots. We successfully began the process of documenting their embarrassing moments and their playoff domination by the Leafs. Head over, say hello, play nice, and post your favourite playoff memory.