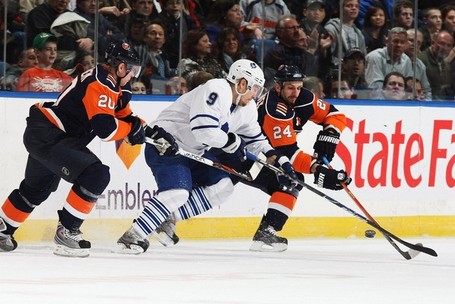 This Newsday reporter must have been sleeping through press conferences:

Witt said his hit on Stajan was unintentional and he made sure Stajan was in good condition after the game.

Maybe someone should direct him up to the Blog Box, they all probably know what players were involved in the game's major incident. Seriously though, don't read the rest of that Newsday link, I've read more interesting take out menus.

Speaking of the blog box, I picked two at random. One of them hasn't updated about the Leafs game and the other one doesn't seem to exist. I felt this was unfair so I clicked down the list until I got an Islanders blog that existed and had updates about yesterday's game, you're on deck for today's NNN NY Islanders 7th Woman!

Gordon explained how the ref told him that Brendan Witt just got caught in an unfortunate situation which earned him a 5 minute major game misconduct. We'll have to see how the league feels about it later today.

In college once I got wrapped up in this unfortunate situation where I robbed a convenience store before forceably violating all of the employees and burning the building down while they were all tied up in the back room. I mean, I didn't have any money for gas, and I also wanted some beef jerky so what else could I have done?

Dominik at Light House Hockey has his take on what happened:

Now, this is the pivotal, split-second moment that separates a blown assignment from a dangerous mistake. The moment when a checker must exercise the proper instincts not to endanger someone's brain. Witt at this point realizes he's going to miss his man -- but he is programmed from years of testosterone-infused coaching that he should not let this happen at any cost. So Witt doesn't let it happen: He breaks proper checking form, throwing his elbow out and even opening his knee up to get a piece of Hagman via whichever appendage can do the job.

Good players force bad players into mistakes. Those mistakes shouldn't include dirty purposeful hits to the head. Not suspending Witt for a long time sends the message that the NHL doesn't care about its skill players. Make an amazing move with the puck? No worries some no talent thug will elbow you in the face and maybe end your career, that'll show you smart guy.

Don't let Islanders fans convince you that Witt's a useful player, by the way. Dominik's article is titled "Witt's year gets worse", and that's hardly the only negative thing Islanders fans are saying about Witt. Additionally, Sean Hill may have been caught with steroids, but Brendan Witt's name comes up in a lot of steroid rumors. It's in God's Colin Campbell's hands now though, so we all know what that means: 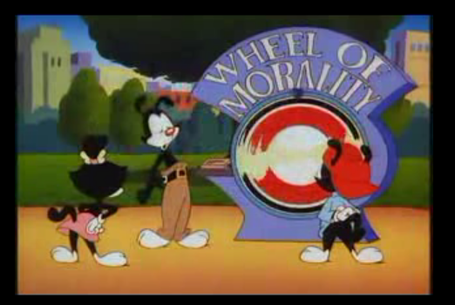