Editor's Note: After the laughably short Witt suspension was announced (over/under on the number of games Hagman misses is at 7.5) Junior took a look at the Islanders' schedule. I'll bet that you will never imagine who his fist game back will be against or in what hockey-mad city...

Newsflash:  The NHL prefers bucks to brains.  It's no big surprise.  So why the hell am I losing my shit about this tonight?

From the Globe and Mail story about Witt's suspension:

The 34-year-old Witt will forfeit US$74,372.75 in salary and is eligible to return to the Islanders lineup on March 10 against the Maple Leafs.

You've got to be f&%king kidding me. 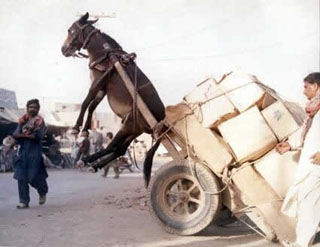 To be clear, it's not so much the length of the suspension I am upset about, though I believe it to be too short.  As pointed out above, others have been fined or suspended for fewer games this year for head shot infractions.  Of course, it wasn't that long ago that Steve Downie got 20 games for his dangerous play.

The point is that the sentencing system is so ridiculously arbitrary, virtually any penalty fits within the range the league has established.  In this case, the NHL could easily have imposed a 6 or 7 game suspension instead of the five-gamer actually dispensed by the Vending Machine of Supplemental Discipline.  Some would argue that something on the order of 10 games would have been appropriate for Witt if the league is truly taking the issue of "blows to the head" seriously.

The NHL could have made sure that Brendan Witt missed the next game with the Leafs.  But it did not.  Five games it is.  Oh and look, out skates Brendan Witt on to the ice at the Air Canada Centre on March 10th, 2009 - the drama of the trade deadline behind us, both clubs just tanking as hard as they can to get as high in the draft as possible ("Do we have to start a goalkeeper?  Really?  All three periods?").  You know, I heard on TV - or was it in the paper - that this is Witt's first game back since The Hit on Hagman.  Everybody nudge the guy sitting in the seat next to you, this could get ugly.

The conclusion is almost inescapable:  the National Hockey League is exploiting Brendan Witt's cheapshot bullshit elbow to Niklas Hagman's head.  In a pathetic attempt to generate a little bit of extra (and free, don't forget "free") buzz about an otherwise ridiculously meaningless late-season meeting between two teams that will finish at or near the bottom of the standings, the NHL is going to be stupid enough to put Brendan Witt back on the ice that night.

Quite apart from the dubious wisdom of putting Brendan Witt on the ice at all, ever, this has to be one of the dumbest-ass things I have ever heard.  Making Witt available to play this game does nothing but stir the pot.  It is without a doubt true that rematches that follow ugly incidents like the one in last night's game aren't always fight-filled affairs;  the players are, it would seem, usually sufficiently fearful of  the league's ridiculously erratic suspension system to suppress their aggressions until another day.  Grievances may then be settled at an appropriate choronological remove from the original precipitating incident so as to adroitly avoid charges of premeditated thuggery.  Sometimes, though, the passions run too high and Wheel of Discipline be damned, redress must be had for offences committed.

In this year of "increased concerns about headshots" and heightened vigilance about blows to the head, how does it make sense to instigate a riot in this way?  In what world does it seem like a good idea to anyone who hasn't had a frontal lobotomy to send Brendan Witt out on to the ice in front of 19,000 Leaf fans screaming for his head?

The only explanation that makes any sense at all is that the NHL simply doesn't care about the message it is sending to the players and the public about irresponsible and dangerous play.  What they care about is the quasi-pornographic thrill of setting the cat among the pigeons, stepping back and watching the fur and feathers fly.  That and counting the money that they truly believe will follow soon after;  increased "fan interest" means increased ad revenue, better TV dollars and a Happy Christmas for the folks carrying briefcases full of important marketing reports in and out of offices on the 47th floor of a shiny building in Manhattan.

When the brawl happens, if it happens; when the vitriol rains down upon the league from the ink-stained wretches and the warbling messiahs of sports talk radio;  when the blogosphere is a-twitter with controversy and the highlight shows run sixpacks of "best ever bench-clearing brawls" in between pious and solemn homilies about the need to eliminate fighting from the game, Gary Bettman will get up on a stool, reach up to pat Colin Campbell on his shiny forehead, and smile.

Hopefully, the league will put a few dollars of the extra revenue generated by all the hype and hoopla about such games aside.  You know, a few token sheckles siphoned out of the wayward millionaires' fund and tucked  into a bursary for the wife and family of the first guy who - somewhere down the road, as a direct consequence of the league's decision to prefer bucks over brains -  has his grey matter permanently and irreversibly scrambled wheelchair style by one of these gutless, inexcusable, unnecessary and completely preventable hits.  I think It would be nice if the league could, at the very least, chip in a few bucks for the lifetime supply of pureed corn the poor bastard will be eating for the rest of his life.

But I wouldn't bet on it.

Tip of the helmet to Dominik at Lighthouse Hockey and his screed about the discipline system in general.

Please indicate the degree to which you agree with the following statement: "The NHL supplemental discipline regime is a fair, principled and rational system designed to protect the players from dangerous incidents involving gratuitous violence."