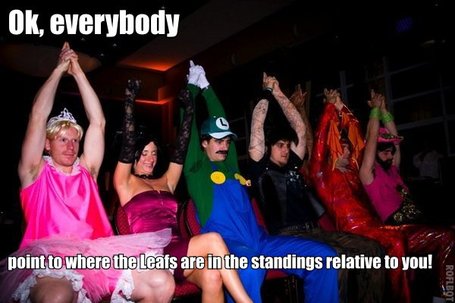 I never stop laughing at that picture. The Stanley Cup contending senators have two games in hand on the Leafs but still need to win those two and tonight to pass them. That's sad. There really is no other word for it. Well, I mean 'hilarious' works too but what hurts more than pity?

Far be it from Ron Wilson to break up a winning lineup, but the coach of the hottest team in the Eastern Conference is going to do just that.

Defencemen Tomas Kaberle and Mike Van Ryn are both healthy, as well as centre John Mitchell.

"They're ready to play and they'll be in the lineup (tonight)," Wilson said of Kaberle and Van Ryn. "I expect us to start playing better defensively with those guys getting in the lineup."

Let's not go crazy Ronnie. Putting in two of your best defencemen into the lineup despite being the proud owners of a three game winning streak? What would make you think that's a good idea:

Still better than the senators.

Oh, that makes perfect sense when you put it in the most logical way possible. One can only hope that Kaberle will be able to showcase his skills during this period leading up to March 4th and assure any potential buyer that he's recovered from his wrist injury. Mr. Glass The Next Generation will just be glad that while close to Quebec ottawa at least has a river separating it from the land of his tormentors.

The Leafs are not just on a three game winning streak they are also on their best run of form against the red headed step children since...a long time. 6-1-1 over the last eight games represents the kind of regular season dominance that passes for success in the National Capital Region. We prefer the playoff kind but we'll take what we can get.

By way of welcoming the apostate PeterR and the functional illiterates at Silver Seven (or Silver Seven Sens?) we decided to get some quick banter going to remind us why the senators hate us so much (do we care about them? Not really). We'd let the judges make the decision on a winner but the ref had to stop the fight before PeterR ended up like Apollo Creed. Our answers can be found here.

1. Ottawa's window: closed, or closed and boarded over?

Well, a few guys did all they could to paint the thing shut, but Eugene Melnyk is throwing all the money he can at a top-of-the-line paint scraper for Bryan Murray to use. I think I feel a breeze, too, and it smells like Erik Karlsson.

2. What did keeping Redden instead of Chara feel like?

It might have cost Bob Chiarelli (brother of Boston GM Peter Chiarelli) the mayoral race right afterwards, but it probably felt a bit like choosing Andrew Raycroft over Tukka Rask (or over anything this side of a bag of pucks).

3. Have you ever knowingly cheered for Jason Spezza?

Ever since he was a young game-breaker in Jacques Martin's doghouse. Sure, he gives the puck away and looks lazy at times, but he's ours.

4. Before the Sens: Leafs or Habs?

Leafs, in my youthful ignorance. But those were the heady days of Dave Andreychuk, Doug Gilmour, Felix Potvin, and so on. I still get nightmares about it, though.

5. Keeping in mind that I routinely go drinking in Bed-Stuy in Brooklyn, why are there so many homeless people in downtown Ottawa?

Because they don't want to risk being shot in Toronto or set on fire in Montreal. (Too soon?)

Don't forget your SPG Picks. If you haven't played in a while get back in shape and if you have never played now's a good time to learn because we have some prizes we'll be giving out soon for SPG prowess.