Opposing Coverage: Die By the Blade 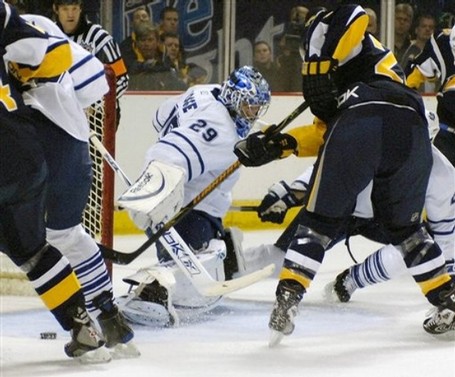 Pogge gets the start tonight against Buffalo. Grabovski will be a healthy scratch and both Deveaux and Frogren will be playing in the Ricoh Center. For more about tonight's game, here's Die By the Blade's D.O.:

Eight games against division opponents is too much but the Sabres and Leafs have not played nearly enough this season.  In past seasons it seemed like they played once a week and now the games are few and far between.  This is only the third meeting of the season between the Leafs and Sabres but the series starts heating up now.  The only other matchup in Buffalo was back in December and finished with a 2-1 Leafs win.  There is something about the games played at the HSBC Arena between these two teams.  It's an electric, almost playoff like, atmosphere. (Ed. note: It's an atmosphere full of Leafs fans, that's why your building is so loud.)
The Sabres come into this matchup fresh off a long six game road trip that began before the All-Star break and finished on Monday night in Anaheim.  Along the way, the Sabres have seen there defense become depleted...much like they did in the Eastern Conference Finals in 2006.  The Sabres will be without Teppo Numminen, Andrej Sekera, Henrik Tallinder and Jaroslav Spacek and will rely on young rookies to take their place.  Chris Butler was playing at Denver University a year ago and now he is relied to be one of the Sabres best defensemen.
The Sabres have played much better as of late and have actually moved into seventh place in the Eastern Conference.  This is a big week for the Sabres, beginning with the game tonight against the Leafs.