Is It Revenge If We Wanted It To Happen?

Share All sharing options for: Is It Revenge If We Wanted It To Happen? 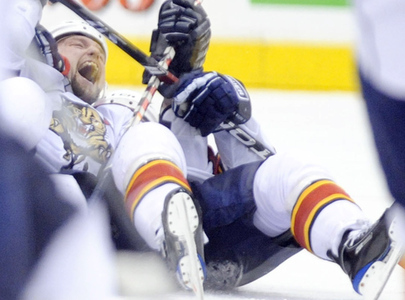 Joe Bowen spoke the words at the beginning of the third period: " Florida is the only team in the league to not come back from going into the third period down a goal or more". And this the stage was set, it was time for the VOODOO to return. If Joe Bowen would have said "No hummingbird has ever tickled a monkey", Vesa would have found a way to make it happen.

Fans aren't superstitious about announcers talking about no-hitters or shutouts for no reason. Joe Bowen needs to stop saying things that will come back to bite the Leafs in the butt and start yelling at Greg Millen more often. The guy is blind as a bat. Forget how every goal in the history of hockey has been tipped or screened. Last night he was talking about how a glove pass had not been called on the Panthers' second goal. Too bad it was in the defensive zone and the replays clearly showed that fact.

The happiest man in the Air Canada Centre might also have been the most reviled.

Former Leaf Bryan McCabe – booed on every puck possession – raced down the left wing and fired a slapshot that beat Vesa Toskala to lift the Florida Panthers to a 4-3 overtime win last night.

The comments to that article are filled with the usual stupidity which makes me wonder: why are non-sports fans commenting on sports stories? If you don't undertand why fans would boo Bryan McCabe then stop watching sports because you're doing it wrong. Don't tell me not to boo a guy that refused to acknowledge the shortcomings in his game or thought that fans had no right to boo or that hid behind excuses every day of his career while making millions of dollars. Don't tell me that he wasn't forced to take those millions because I don't care. He played for the Leafs, his job was to play defence, and he stunk at it.

Toskala's play, the Leafs' inability to finish off opponents and their performance anxiety in front of their own fans continue to be three of the many sore points in this lost NHL season.

Last night, the Leafs, 19-23-9, appeared to be headed for their first back-to-back win at the Air Canada Centre this NHL season. They entered the third period with a 3-1 lead, but blew it after giving up goals to Stephen Weiss and Cory Stillman.

- Tim Wharnsby, The Globe and Mail

The Leafs are a dismal 9-10-6 in front of their home crowd, the fourth worst record in the 30-team league.

Can you believe that? Keep that in mind if MLSE tries to increase ticket prices. But it's not all doom and gloom:

Well, well, well. What else is there?

It's also believed Bouwmeester would prefer to play in a traditional hockey market.

Replace 'traditional' with 'insane' and he might as well be talking about the Leafs. Welcome to Toronto Jay!