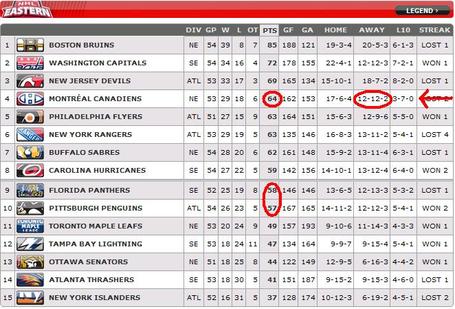 There are a few interesting things to pick up from here. The first is obviously that the senators and Lightning need to get their act together and pass the Leafs. The others involve the Canadiens. They are only 6 points out of 9th and have been the worst team in the Eastern Conference over the past 10 games. Even better, they are headed out on a six game road trip where they have just a .500 record. They'll be facing: Calgary, Edmonton, Colorado, Vancouver, Washington and Pittsburgh. It's not unbelievable to think that they could just pick up 4 of 12 points.

Losing 5-2 to the Maple Leafs - no powerhouse team, to be honest - is in every way unacceptable.

The trouble with diagnosing the Canadiens problems lately is that it has become a six headed monster. It stretches from the net out and back, and has infected every point in between. Getting through this on to better days will take a great amount of character, soul searching, and players admitting to themselves and team mates what their faults are.

There is just something about seeing Habs fans feeling shocked to see their team lose to the Leafs. It reminds me of my reaction after every loss to the Habs from 1998-2004.

Wasn't expecting to play? Is that why he wasn't ready, is that tonight's excuse? 2 games in 2 nights in 2 different cities isn't something you want to make your goalies do, but when one is sick you would hope an All-Star could handle it. Well 5 weak goals and another 2 disallowed ones would make me disagree. I really don't know what is wrong, but what I do know is something has to change. Maybe Carey is the next Raycroft, maybe not, maybe this is the anomaly, his single rough patch of the year. What I do know though, is that we need wins and I don't think the Habs can keep letting up 4+ goals in every game. Right now we aren't scoring that much so it would help if we were getting some NHL-level goaltending. Carey's play was laughable tonight which is really disappointing considering the opponent and the need we had for 2 points.

Is it an anomaly when the exact same thing happened in the playoffs last year against the Flyers? Andrew Raycroft is offended by the comparisons to Carey Price's glove hand. And note the highlighted part. Carey Price is not an all-star. He was voted to the All-Star game not to the league's All-Star team. That is excatly what I predicted would happen when Habs fans started stuffing the ballot box.

The whole Grabovski issue killed us tonight as we played right into the Leafs' hands. Trying to impress fans or the media players like Laraque, Komisarek and Bouillon went above and beyond to find Mikhail on the ice and I think that is one major factor why we lost this. Grabo was wise, however, as he didn't get involved and seemed more than happy with the 2 points.

Grabovski played this one perfectly. He went about his game and didn't lose his cool. He showed a lot of maturity last night.

"We’re not doing anything right," said Carbonneau, whose team is clinging to fourth place in the Eastern Conference despite losing seven of its last nine games. "We’re having trouble scoring goals and it seems that whenever we make a mistake, the puck’s in our net."

When asked what he didn’t like about Price’s performance, he said: "Where do you want me to start? He let in five goals."

Considering how fragile Carey Price has shown himself to be is it a good idea to call him out in public like that? Ha, like I care! I guess instead of "Jesus Price" it was more a case of "JESUS! PRICE!". Last night's game was so much fun that even The Omen's heart grew...well maybe not three whole sizes but at least a millimetre or two.

This isn't the way it was supposed to unfold for Les Habitants in their 100th anniversary season.

From their ancient rivals, the Leafs, they should naturally expect not an ounce of sympathy.

He was also the only one that mentioned the dirty hit from Max Pacisomethingorother:

The sour note for the Leafs was another injury to Van Ryn, this time a leg injury of some kind suffered in the second when he was slammed partly from the side and partly from behind into the end boards by Montreal rookie Max Pacioretty.

Poor Van Ryn. I guess the bright side is that since the Leafs look set to trade Kaberle and Kubina that he'll provide the veteran presence on the blue line next year. At this pace, the Leafs might as well shut him down and wrap him in bubble wrap.

Oh, and on a final note, you are all welcome for last night's game:

Here's the bottom line though: I was meant to be going to this game and had to cancel. This means that the Leafs are going to give their travelling fans a lot to cheer about and they'll save the lemon for the next time I cross the pothole border.