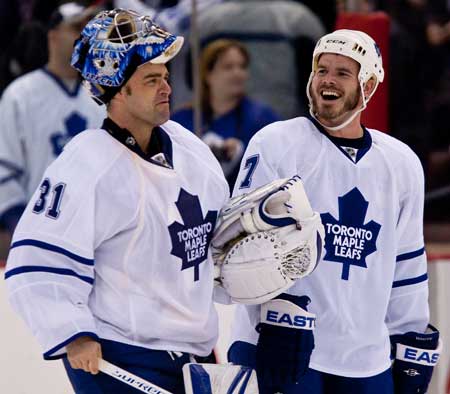 "Wilson's sending you out against the sens? The sens really do suck."

If you need musical accompaniement to what you're feeling this morning as you realize that the Leafs are 7-1-1 against the senators in their last nine meetings I suggest you give this tune a listen. Things are falling apart in ottawa and I don't know if anyone is happier than me. Well, maybe DGB since he actually has to live in the City That Fun Forgot. And despite some improvement in play the same things are killing the senators:

Upset with the way the club started after spotting the Leafs a 2-0 lead in the first period, Clouston changed all the lines and moved Alfredsson to play with Mike Fisher and Nick Foligno.

DGB already pointed it out but the senators' carousel of coaches have an obsession with 'switching things up'. What they don't realize is that they are giving everyone an excuse to not produce. By not keeping the top three earners together he refuses to challenge the rest of the team to carry their own weight. By putting them on lines with the crappier players he gives the 3rd and 4th liners the handy excuse that if they don't pick up their game it's because of the failed efforts of their money men.

Even better, dig into the post-game quotations to see how the level of accountability in the senators' dressing room mirrors what had developed in Toronto

Elliott, who faced 38 shots, seemed reluctant to take responsibility for the bad goals. He said he was upset about the final goal because it cost the Senators the game, not because it was a bad goal.

"You want every shot," he said. "You can go over it in your mind and kill yourself about it, but, you know, just work in practice to get better everyday."

Remember when Elliott was the goalie of the future? Maybe the crystal ball is a little dusty. And of course, there is no one that avoids accountability in that dressing room better than Giggles:

Similarly, Spezza was surprised he was called for hooking, since he had observed many other offences go unpunished.

"Maybe a little marginal," he said. "There are three power plays all night and a lot of stuff gets let go, but I’m not the one making the calls.

"You don’t want to take penalties, especially 200 feet away (from your own net), but there’s a lot of stuff that was let go and I’m surprised about that one a little bit."

I think you could say that things have hit rock-bottom in the relationship between Giggles and the fans:

Eight years...EIGHT...since you were drafted. Fifth year in the Bigs. Eight million a year. And you're still an idiotic, uncoachable, infuriating waste of ice time I wouldn't trust to look after my dog. Ever wonder why your name never comes up when people talk about the leaders on this team? Watch this tape. Then watch a tape from your rookie year. You remember that one, right? That was the year you bitched and whined because Jacques Martin said you were a boy playing in a man's league. What do you see? That's right. You see the same mistakes over and over and over again. EIGHT GODDAMN YEARS!!

Seeing Old Yeller getting one last run out in the building where he haunted the senators for so long raised some eyebrows:

What this conspiracy theorists forgot, besides the basic fact that the players and coaches don't stop trying their best on purpose, is that the senators are horrible.

The standings didn't matter to the sold-out crowd of 20,050 at Scotiabank Place, about half of whom were Leaf fans. The place was energized and overtime just meant more time for fans of both teams to cheer their team, jeer the other.

Watching the highlights they should have had the goal horn going off for the Leafs' goals too. Since, insane dreams aside, this season is over but for the revelling in others' failures this tidbit caught my eye:

Three scouts and Columbus GM Scott Howson took in the game. The latest Leafs added to the rumour mill were Mayers, whom the Leafs gave up a third-round pick for, and Ian White.

That's pretty exciting. If the Leafs' can get anything back for Mayers it'll go a long way towards cleaning up some of the small mistakes that Fletcher made. Now if he can only get something for Ryan Hollweg. Actually, seeing that Ian White is drawing interest would let the Leafs' sell another asset at it's peak which could go a long way towards changing the pattern of results. Then again, maybe they were watching the senators since they are such a talent-rich team. Oh Kevin, Kevin, Kevin.