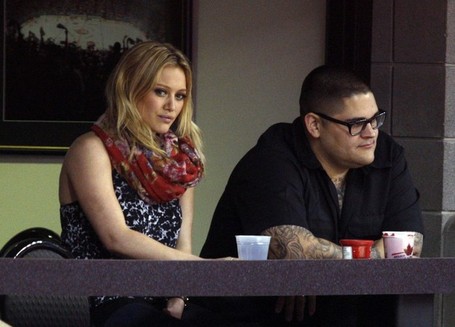 I find it ridiculous that an idiot like James Duthie will imagine that he has the right to dismiss bloggers as rumour-mongerers that live in their parents' basement when he hosts segments that do nothing but monger rumours. Blogger v. journalist arguments shouldn't exist. Not because we fill different roles (mostly we don't since most hockey coverage features very little reporting) but because it makes 'journalists' look like tools. And hypocrites. And douchebags. They make up rumours (see Dominic Moore to Chicago) and we can make up rumours (see James Duthie wears Depends).

Exhibit A: Bruce "Malkin to the Kings" Garrioch

There was much grousing here in Ottawa, particularly amongst the media, that Wilson had scuttled the best subplot to a late-season game between non-playoff teams.

Paul Hunter is a good man. He does not point out that the main member of the ottawa media that was upset was Bruce "Malkin to the Kings" Garrioch. Why was he so upset? Because not being able to file a paint-by-numbers article about Gerber's return to ottawa meant that he had to take time out of his senators-sponsored individual hot dog eating contest.

Wilson certainly did a good job making himself the centre of attention. He opted not to start former Senators goalie Martin Gerber and decided to go with veteran Curtis Joseph instead. That backfired as well.

Just kidding. Of course he didn't watch the game. Looks like he decided that he was going to stick with his pre-game hissy fit. Looks like he is trying his darndest to make himself the centre of attention. Some might say that he's projecting. I don't know that starting CuJo backfired. If not for two ridiculous fluke shots he would have shut out the toothless senators.

All this talk of Bruce "Malkin to the Kings" Garrioch reminds me of one of DGB's earlier posts about the Mark Bell Hit of Glory:

Clearly, that must be Garrioch's point. If the roles were reversed, I'm sure he'd be just as critical. If (in a purely hypothetical scenario) a Senators tough guy laid out an opposing teams star player on a virtually identical hit, Garrioch would be first in line to condemn him too, right?

Spoiler alert: Of course he doesn't. And it's epidemic in ottawa as Allen Panzeri (I'll spare you the Mike Milbury-esque joke) chimes in with his own fake outrage and is also skewered:

Meanwhile, just in case anyone thinks this is limited to Garrioch or to the Sun, here's the Ottawa Citizen's Allen Panzeri. Watch as he tries to out-Garrioch Garrioch by going into full-on hysterics over the Bell hit.


I've looked for the articles where Panzeri is equally outraged by the Neil hit, but haven't been able to find a single one. Weird. Must be some sort of Google database error.

So what did Panzeri have to say about last night's game:

The Ottawa Senators hadn’t had much luck against the Toronto Maple Leafs this season, winning just once in four games.

In any game against the Maple Leafs in Ottawa, Alfredsson plays the dual role of hero and villain, jeered by Toronto fans for his past grievances, real or imagined, and cheered by Ottawa fans.

Dear God. Is it that hard to admit that a player has committed a wrong? Is this really an imagined grievance? Or is it a filthy fucking hit? We'll never know until it happens to a senator. Argue whether it makes sense to keep booing him after seeing Bell leave Krusty with jelly legs but don't pretend that there was nothing wrong with it. It would be like seeing Leaf fans defend Domi's elbow to Niedermayer's head. Patently ridiculous. It's an epidemic with them:

"Real dangerous, I guess," said an annoyed Spezza sarcastically. "They told me (the blade) was too skinny. I shave them down to be skinnier."

HE KNOWS HE DID SOMETHING WRONG! LOOK AT HIM TRY TO BREAK HIS STICK AND TRY TO HIDE IT! How hard is it to accept that you did something wrong? Maybe it's because of the culture of getting away with murder that pervades in ottawa as the media give the players a free pass on any (sniff)thing (sniff) that they (sniff) do. Hell, PeterR has been driven to the "everyone's doing it" defence:

On the Team 1200 Senators' post-game show, analyst Mike Eastwood hypothesised that at least one player on each NHL team is likely playing with an "illegal" stick, particulary the better players. If that's the case, then the league needs to make a decision: Change the regulations, or mandate stick-checks before every game. A penalty is only as strong as the degree to which it's enforced, and there's no sense looking past a player's infraction 99 per cent of the time, until they're called on it.

Look, lots of people do a lot of illegal things but if we all had that attitude it would be chaos. If coaches are not calling players on using illegal sticks it may be because they are waiting for the right time to spring their trap but it is still breaking a rule. They sound like Sabres fans that are still whining about the puck over the glass delay of game penalty from 2006. EVERYONE KNOWS THE RULE!

Something that's come up is why the league even has these rules.

That is the stance of Giggles and Sens Army (BWAHAHAHA they didn't even sell out last night) and it makes perfect sense. Since they've never lost a player to an eye injury and don't give a shit that one of their player's carelessness with his stick cost a player a promising career it might not have crossed their simplistic minds why that rule might be necessary:

Now, my eye might not be regulation sized but a 2" wide blade would not fit in my eye socket. Try it for yourself and tell me what you find. Don't worry about the weird looks from your co-workers. Just tell them that you are proving that you are smarter than an entire fanbase.

Last Minute Update of a Reasonable Link That Did Not Lend Itself to Mocking:

Puck Daddy wants to see the rule enforced all of the time rather than on a coach's whim. I disagree that it's against the 'code' to call players out on cheating. Also, he misses the revelation about why the rule might be needed.