Islanders @ Leafs: There Will Be Blood

Share All sharing options for: Islanders @ Leafs: There Will Be Blood 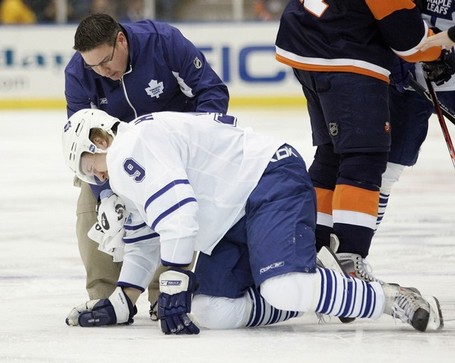 Brendan Witt's suspension is up, it's time for some retribution and a four point loss to the current leaders in the Tavares sweepstakes. Speaking of which, John Tavares is probably crossing his fingers that the Islanders win this game and then go on a 15 game winning streak.

The only problem I see is, we don't have anyone particularly tough to drink Brendan Witt's milkshake tonight. Perhaps Brad May could be glued on to Jamal Mayers' shoulders, and the two of them could occupy one roster spot as Bradmal Mayers. During the game, Ron Wilson would unleash this mythical four armed fighting legend where it could elbow Witt in the mouth four times at once. Magic!

We can do this! Toronto can make it down to 26th and keep shooting lower for those draft picks! We won't be out-tanked by Ottawa! Go Leafs go!

Erm. Sorry about that, here are the previous meetings between these two "terrific" teams:

The Leafs remain without Kaberle, Frogren and Hagman, (Van Ryn and Toskala are done for the year), so we should get another look at Oreskovic and Stralman tonight. I think they acquitted themselves well last night, Oreskovic was on the ice for the Weasel's goal but almost caught up to him and made a play when Ian White blew it.

The Islanders have a bunch of unimportant players injured:

Remember your SPG picks! Cheer for a Leafs loss to help the draft pick cause!

ps. Any interest in a field trip tonight?