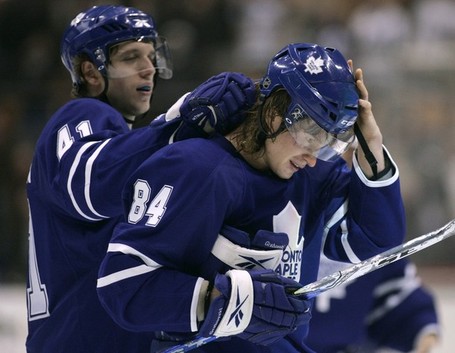 Morons. Mere minutes away from a four point win in the Battle for Tavares, Alexei Ponikarovsky ruins the whole thing, and then Mikhail Grabovksi, who's been MIA for weeks, decides to finally show up. Thanks a lot.

Say one thing about Mikhail Grabovski – his English has gotten a lot better since the last time reporters wanted to speak to him.

Is this supposed to encourage Grabovski not to score in OT? Whose side are you on McGran?

Gerber was the best Leaf penalty killer, helping kill five in a row in the third period while winning his second game in three starts in blue and white.

Well, at least our PK is getting better.

But being an also-ran comes with a price, even in hockey mad Toronto. Fans stayed away in droves last night.

They had good reason, last night's game was terrible hockey from what I watched.

Perhaps it was the weather, perhaps it was expectations that this was a game only John Tavares would be interested in, a battle between two teams who have only draft position to play for.

"I guess it wasn't a big one for them to come to," Mitchell said of the crowd. "Sometimes these are the games when you miss, you wish you would have come."

The sad fact is, the most exciting thing that happened last night was Ron Wilson telling off Howard Berger. Nobody wanted to shell out big bucks to see two terrible teams play, and the game was on LeafsTV so no one could watch.

In the summer I wrote about how the Coca Cola Fans First game was a load of shit. Coke could have sent people to a midweek Leafs-Isles game, or a midweek game against someone else who sucks like Tampa. (What? Who do we play next? Ugh.) These are meaningless games between AHL squads.

Pray that Burke works some absolute magic at the draft, or practice your Clay Davis impression because you'll get a lot of use out of it.

Editor's note: This is more of a Debbie Downer Diary than it is a Negative Nancy Notebook. Sorry.