Share All sharing options for: Recap: Lightning 4 at Leafs 1 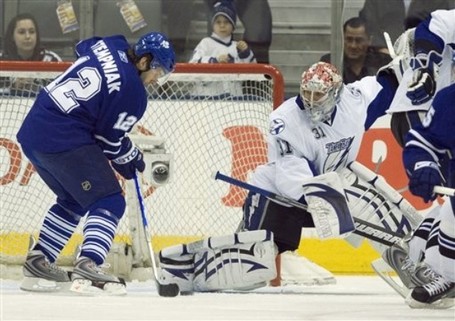 This game started off pretty well, Stempniak banged home a pass in front of the net to put the Leafs up 1-0 in the first. In the second period Martin Gerber showed up to play when he stoned Martin St. Louis on a breakaway. Shortly thereafter, Kulemin turned the puck over at the blue line setting up a Matt Pettinger goal that barely squeaked over the line.

Then the Leafs had a series of questionable calls against them, but calls nonetheless and allowed a cross crease bang in goal from Stamkos to St. Louis, and a period later Ryan Malone banged in Tampa's second power play goal. With 2:06 left in a 3-1 game, something familiar happened. Hometown boy Paul Szczechura sniped one past Gerber... what a great story thanks for coming home (seriously why can't you all just die and stop coming home and ruining everything?).

I had high hopes after reading Mayers' statement this morning, that maybe the Leafs would come out and skate well, but they really didn't. Sure this team has been gutted but Tampa is still below the Leafs in the standings, despite the loss of Antropov and Moore.

There's a lot to take away from this game; the Leafs need to skate for sixty minutes if they want to beat even the bottom dwellers in this league. Toronto had a few great shifts where they absolutely dominated the Lightning and then immediately gave up a goal as soon as Tampa cleared the zone. Also, it'll take more than one goal scorer to change the fortunes of a franchise - the Lightning have Lecavalier, St. Louis and Stamkos and they're in a better position for Tavares than the Leafs are. They too have no defense or goaltending.

I don't expect the Leafs to win lots of games, and to be pragmatic it's better that they lose, but tonight the most emotion I saw was Ron Wilson rolling his eyes when he got tossed at the end of the game. It's not hard to see why people didn't bother driving to the ACC to see the Leafs play the Islanders Monday.