Fed Up and About Time

Share All sharing options for: Fed Up and About Time 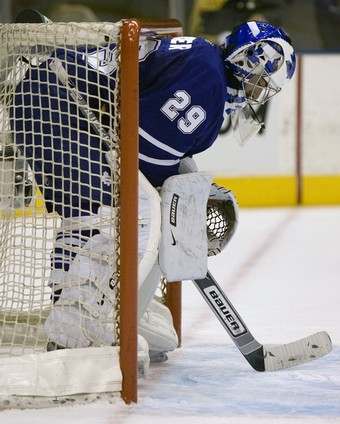 How bad was the Leafs' performance last night against the Tampa Bay Lightning? Bad enough to precipitate a closed door team meeting immediately after the end of the game. Any more suggestions from Working Class bloggers that this team should be trying to lose on purpose should be met with incredulity because these professionals will not lose on purpose:

"Guys have to put 100 per cent effort in every night and anything less is unacceptable," continued White. "For the most part we're playing really hard hockey but ... sometimes there's a lack of effort. It just can't happen at this level."

That team meeting actually made for a pretty long wait while the LeafsTV crew discussed Steven Stamkos and everything related to him from the fact that he had almost 60 friends and family members in attendance, that he got yelled at by St. Louis, that he learned to always pass to St. Louis, that he plays on a line with St. Louis, that he is improving because of St. Louis, to the fact that he loves the city of St. Louis. Just kidding. I assumed that last one based on how much the Stamkos-St. Louis pairing was being slobbered all over. Newsflash boys: The Lightning are worse than the Leafs. Anyway, rumours that the press conference had been postponed when this transcript was leaked by DBG:

Unfortunately, Simmons has been sighted at McDonald's ordering a McNugget-McFlurry.

It's good that the players are upset with themselves after that performance. The Lightning roster, as bad as the Leafs' is this season, beyond Lecavalier, St. Louis, and, recently, Stamkos is borderline AHL quality. There is no reason for the Leafs to have lost their third straight game against the Lightning other than the fact that they once again played below the level of their competition. Beyond that there were two other major storylines. And by major I mean on legitimate one and one wholly contrived.

After a subdued press conference with Ron Wilson where you could cut the tension with a knife, and coincidentally Berger was silent, LeafsTV moved down to the dressing room where Berger asked his stock question ("Did 'insert frustrating action' annoy you?") of Ben Ondrus. He was referring to Aryukhin's stick work and other journalists worked to get the answer that they wanted out of him:

"They want to take fighting out of the game," growled the Toronto forward, "and all the stick work is going up."

Ondrus was referring to Evgeny Artyukhin, the 6-foot-5 behemoth of the Bolts, whom Ondrus claimed was jabbing him liberally near the end of the game and getting away with no retribution.

"Maybe someone beats the crap out of him and he doesn't do it again," Ondrus said. "I was standing there and he put his stick between my legs and he tried to lift me up or something, I don't know what he was doing. I don't think he speaks a word of English so that was another problem."

Mission accomplished. Wilson got kicked out precisely because he was irate with the referees' lack of action (and their abundance of incompetence throughout the game). If the league is going to do all they can to dissuade players from properly policing themselves then every player and coach agrees that we will see more Artyukhin-like antics. Imagine how Chris Neil or Jarkko Ruutu will behave when they know that they won't have to even bother with turtling.

And no game is complete without hearing about the latest hometown kid to come back and screw the Leafs. This time it was some guy that needs a vowel, Szczechura, and Rick Tocchet:

Tocchet is from Scarborough, a Toronto suburb. Always special to come home, he said. But Tocchet also revealed he was a Canadiens fan growing up. It was easy to like the Canadiens back then as they were pretty much a juggernaut and Toronto was struggling.

Ok, so besides being a degenerate gambler he's also one of those detestable bandwagoners. I look forward to his inevitable gambling relapse. The other interesting tidbit to come out of the legitimate reporting concerned the team's improved penalty kill. From the Hunter sidebar:

D Jeff Finger says there are a few reasons for the team's improved penalty killing lately, but solid play in net is the biggest factor. "A lot of it is the goaltending. Goaltending has been awesome."

In other news, water is wet.

The wholly contrived storyline comes courtesy of everyone's least favourite Toronto Raptors' reporter, Dave Feschuk. I assume that his page views were down hence the drive by article on the Leafs that uses his usual blend of smarm and lack of research to best effect. You can forget getting a link to the piece here but daoust noted that these past two seasons are really the first extended time when the Leafs have played a large number of meaningless games since the Gilmour trade.

Steve does, in probably 5 minutes, more deep thinking about the situation and does note that if the possibility of a real decrease exists it might be because, well, Toronto has a lot of stuff to do.

Be that as it may, I can’t say I’m shocked at the idea that Leafs fans have little stomach for a lengthy playoff drought.  I was predicting as far back as a year ago (and earlier) that Leafs fans would be unable to last through a decline at this point in time.  Toronto’s demographics have changed, people’s attention spans are shorter, the number of events struggling for their attention is greater, and people are more fickle than ever.  The last time the Leafs were this bad was the 80’s when the only competition in the Toronto market place was the ice capades, and perhaps indoor soccer.  Now the Leafs compete with the Raptors, the Rock, the internet, cable sports on TV, and a million other draws on people’s attention.  Let’s all admit that the possibility exists that the patience people have with the Leafs will be far smaller today than it was 30 years ago.

Of course, Feschuk, being a Mensa member and all, must have realized that the economy might play a huge part in the empty seats especially since, the last two times I have been, they were located mostly in the corporate seats.

All of that being said, Feschuk’s argument would hold a lot more water if the economy were healthy.  It isn’t.  Divorcing the two situations is impossible, and thus so is a reasonable analysis of the impact the Leafs poor play is having on their ticket sales.

Well, maybe he looked at it and discarded it. Naw, who am I kidding. It never crossed his mind that if a large percentage of tickets go to corporate interests then during a down economy they might not have clients to take to hockey games. Then again, it's the freaking Lightning and Islanders mid-week.