Share All sharing options for: Flames @ Leafs: The Battle of Rick Wamsley 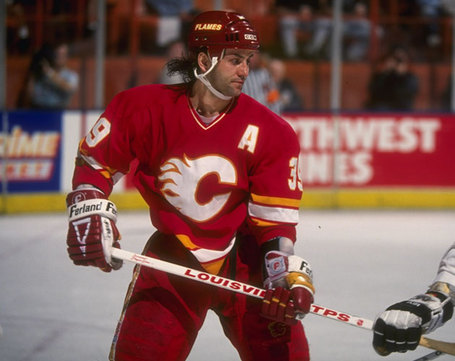 Dearest PPP readers, it's the weekend so you know three things. 1. PPP isn't writing anything useful. 2. The Leafs are playing on HNiC tonight, and 3. I'm still drunk. So with that out of the way, I present today's guest previewer, TLP from The Two Line Pass and Puck Daddy.

Calgary is an.. umm, interesting team. I don't know how many of you saw that comeback shootout win over Deroit the other night, but that game featured basically everything about the Flames you need to know: they can be atrocious to watch, and they can completely dominate the best teams in the league.

I don't get this team and I really don't think I ever will. How does a team pummel Philly, drop a tight one to New Jersey and win a game it has no business being in against Detroit, then lose like 11-3 on aggregate to Carolina and Atlanta IN ONE ROAD TRIP? If the former team shows up in Toronto tonight, it's going to be a bloodbath. If the latter does, the Leafs should be disappointed to win by less than four.

Also, watch out for Olli Jokinen. Prolonged exposure may produce a goal a game and dressing room cancer.

The Leafs are without Hagman, Kaberle, Frogren and Van Ryn, while Calgary is missing Bertuzzi, Warrener, Primeau, Bourque and Giordano.