Share All sharing options for: The Leafs' Power Play Believes in Tavares 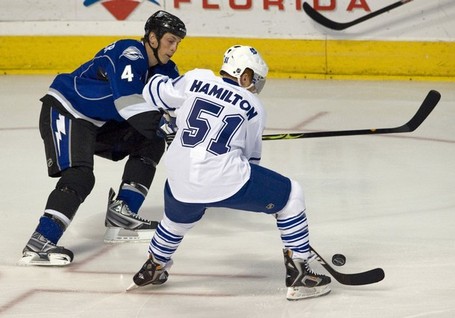 A beautiful 0/5 tonight, the Leafs usually competent power play really stuffed it tonight. Our usually blowful penalty kill was business as usual though, giving up a pair of goals. That said, the Leafs went down 3-0 early in the second when Stamkos scored a power play goal and Pettinger potted a wide open tap in ten seconds later, and the Leafs fought back valiantly to tie it at 3 late in the third. Boyd Devereaux ran the puck down in the corner and fed it through Lecavalier to a streaking Hamilton who fired it home to even things up.

At the end of the third the Leafs killed off a crucial penalty just in time for Oreskovic to hit some nobody and the Leafs to go right back in the box. The PK held steady despite some odd bounces of the puck and the game headed to OT which had some good back and forth action before a Grabovski hand pass landed on the stick of Ponikarovsky who absolutely buried it, to no avail, between Ramo's legs.

The Leafs controlled play in OT but couldn't find a way past Ramo despite some good chances and the game headed to the skills competition where Jeff Hamilton absolutely undressed Kari Ramo after Stamkos hit the post. Martin St. Louis fooled Cujo with a spinorama and hit the post,  but Lecavalier buried one in the third frame to tie it.

Jason Blake faked his shootout spinorama but missed the net, and Cujo made his first save of the shootout against Ryan Malone in the fourth round of the shootout. The back and forth continued into the sixth round when John "That's How F-Bombs are Dropped" Mitchell scored five hole low on Ramo to seal the deal.

It was a good effort by the Leafs, who put 39 pucks on net pre-shootout. There's still some issues with defensive zone coverage as evidenced by Stempniak futilely swatting at Pettinger's stick on the third goal, and the Leafs going 4/6 (.666) on the penalty kill. Good to see Blake keep scoring and for Cujo to get a win.

As much as I'd love to see the Leafs stink up the joint, it has to be a positive that guys like Jeff Hamilton and Phil Oreskovic are playing minutes with the big club and succeeding. John Mitchell plays the role of hero once again in his young career - these young guys are going to learn how to be winners despite the Leafs ineptitude.  Maybe having Cujo, Mayers, Kolzig and May around hasn't been such a bad idea?