Fighting And Fans: Keys to Victory

Share All sharing options for: Fighting And Fans: Keys to Victory 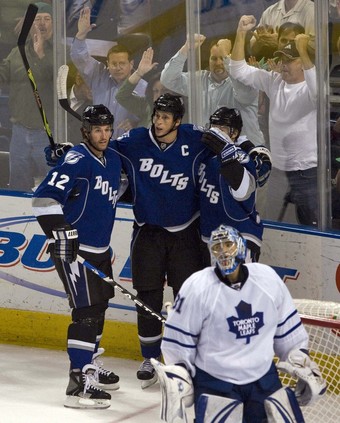 There was no rant. Barely even an icy stare. Instead, with his work-in-progress team down 3-0 to the Tampa Bay Lightning, Ron Wilson called a timeout to help his team find what he called "our equilibrium."

Time-out? Never heard of it. Although it certainly did seem to work. I would say that it was one of three things that turned the tide for the Leafs' last night as they went from listless to full of list. Can you guess the other two? If not, you're probably a senators fan. I'll give you a hint on one of them: Tonight's game matched St. Patty's Day with March Break and took place in Florida. That's right, there were a tonne of Leafs fans! How many? Well, the announced attendance was 18,793 and the only chants heard were "Go Leafs Go!" and "CU-JO!"

This was a rare night in which the Leafs had a crowd that helped put the wind in their sails. "Unbelievable," Wilson said, chuckling. "It was louder than it sometimes is in the Air Canada Centre."

Sometimes? Try always. No blarney, that.

To be fair, corporations don't have souls so they can't be expected to cheer.

The oldest Leaf was certainly pumped up for the game:

"I said in the locker room, `Guys, is this Game 6 of the Stanley Cup final or what? What's going on here?' This is unreal," said Leaf goalie Curtis Joseph, who was solid overall.

No one in the room knew what he was talking about. In fact, Ron Wilson became irate as he questioned whether CuJo was trying to bring up the fact that he had been swept in his only Stanley Cup Final appearance. There had been some indication that the game would start with a bang as both Artyukhin and Ondrus were sent out to take the opening face-off.

There was no trace of any hostilities between Tampa giant Evgeny Artyukhin and Toronto's Ben Ondrus.

Good thing Artyukhin is a pussy. Tocchet looked pissed but whether that was because he had lost a bet to Wilson about his player's fear (of Ondrus?) or because he hates pillow soft Russians is unclear. Maybe it was "Brian Burke" asking him for advice. What I do know is that the Leafs were playing absolutely terrible in front of almost 19,000 of their fans - not exactly a new phenomenon - until Brad May took a healthy run at Artyukhin. Things looked set to boil over but the big Russian pretended that he didn't speak English. Instead, Jamal Mayers absolutely demolished Ryan Craig. And there's turning point # 3.

From then on Jason Blake sparked the offence and the Leafs took over the game. The change in fortunes was vast enough to leave Bolts fans (at their new SBN site Raw Charge) thoroughly confused:

I don't know what was said during the second period intermission - or what not was said, frankly - but whatever it was (or wasn't), it was entirely the wrong thing. The team that came out of the dressing room at the beginning of the third was not the same team that went into the dressing room at the end of the second. In the second period, they were confident. For most of the third, they were shaky and couldn't get the puck out of their own zone.

It feels good to know that for one night it was the opponent's fans that saw their team on the road to a blowout win only to wind up in the ditch after blowing a tire. So the tank battle doesn't work out nearly as well as we had hoped but that's what happens when the players are selfish.