Share All sharing options for: Leafs at Panthers: Spring Break! 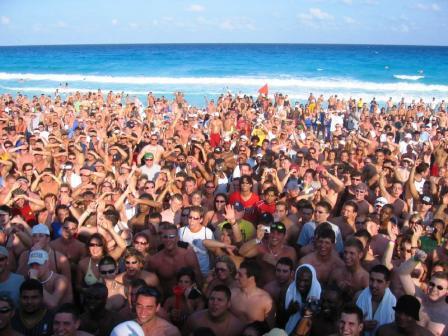 Dumb, spoiled, rich males, aka. your boss in ten years, get drunk and yell at girls to take their shirts off.

For the Leafs, this Spring Break is going to be an opportunity to escape from the mute sushi-eaters in the ACC and play games in front of real fans. Tons of Canadians travel down to Florida in March to get away from the winter and while they're down there they can help out the owners of the Panthers and Lightning by cramming their buildings to watch the Blue and White play hockey.

Florida is in ninth place, three points behind the Hurricanes with two games in hand. The Panthers can control their destiny still, but they're going to need to get hot. They're 4-4-2 in their last ten and have lost their last four straight (SO loss, loss, SO loss, loss to be fair). Toronto's situation is a little less inspiring, and by "a little less" I mean that as General Borschevsky pointed out the Leafs' tragic number is 12 - meaning that any lost points by Toronto or gained points by Carolina adding up to 12 eliminates the Leafs. Six Carolina wins and we can stick a fork in the PLAYOFFS!!!!1 cause they're done.

The Leafs are a shiny 0-1-2 against the Panthers who have to be hungry to get some wins and make the playoffs. The Leafs have their usual injuries missing: Kaberle, Frogren, and Hagman remain out, though Kaberle is still eyeing a return against Montreal on Saturday.

Go Leafs go, but this writer won't be terribly upset if the Leafs start raising their draft stock this week.