This game was eerily similar to Tuesday's game except for the empty seats, the smaller contingent of Leafs fans, lack of a stirring comeback, and the result. So really it was nothing like Tuesday. The Leafs that had previously managed to show some list remained without list for the entire game. There were a couple of exceptions: Grabovski played with the most intensity on the night and Martin Gerber kept the Leafs in the game far past when they deserved to be based on their play.

Taken in isolation the loss might be tough to take but it's not shocking to see a team that has nothing to play for comie out flat. In the big picture, this loss was GREAT! Not only did the senators win tonight to cut their gap behind the Leafs to one point but they beat the Habs. That result combined with the Panthers win puts Florida one point out of the playoffs. 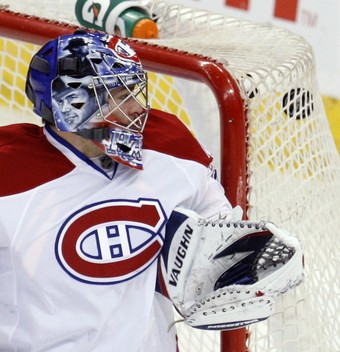 Those don't look like blessed numbers to me. He's actually 20-22 this year. Maybe his father has forsaken him. Jaroslav Halak has outplayed him this season and that strong play was the reason another Habs coach was canned. Carbo was going to play him down the stretch and Gainey had seen his script before so he knew how it ended: with him behind the bench. Claude Julien got his pink slip from Gainey because he didn't trust Jose Theodore who was the previous Canadiens saviour. When the blow up comes I hope the riots don't make their way to Ontario.