Stick a Fork in Them, the Leafs are Done

Share All sharing options for: Stick a Fork in Them, the Leafs are Done 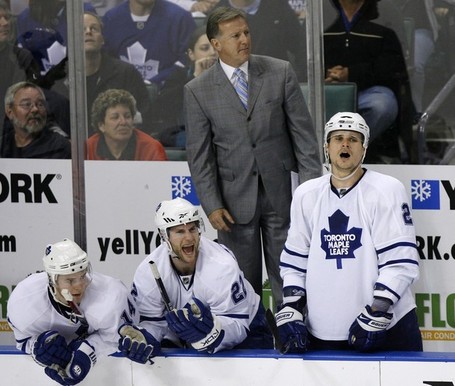 Overall, it was the kind of effort you should've been expecting from the Panthers considering the circumstances.  Had they dropped this one, suddenly the playoffs are pretty far away.  Now they are right back in the thick of things, and have two HUGE home games on Saturday and Monday.

The Leafs were flatter than a lost cat on the highway last night, and in the end that's why they won't be playing an 83rd game this year. For every amazing comeback win there were two midweek games against middle of the conference opponents where the Leafs showed up with an untalented roster that didn't outwork their opposition.

Today's Star will tell you that the Maple Leafs are failures, or that they all stink. That the Leafs couldn't spoil one team's postseason. They'll say the strong play of the club over the past few months was just another late season push that was too little too late, ignoring the fact that this year the late season push was because of people buying in to the system and young players developing as opposed to veterans finally getting in gear for the sake of their future contracts.

None of us expected much out of this team, and with significant injuries to Toskala, Kaberle, and stunning new arrival Mike Van Ryn the Leafs still put a good number of points on the board. Most hockey pundits picked the Leafs for dead last in the conference yet the Leafs weren't formally eliminated until there were only 11 games remaining in the season.

Now more than ever, we as Leafs fans are preparing to look forward to draft day, we'll be scouring the ISS rankings and debating Cowen vs. Duchene, Schenn vs. Svensson-Paarjavi. But just because the Leafs are eliminated doesn't mean that the games are meaningless. Montreal's tanking fast and a win Saturday vs. the Habs could be the final nail in Montreal's coffin.