Maple Leafs @ Canadiens: Could a Bad Season Pick Up Some Shine?

Share All sharing options for: Maple Leafs @ Canadiens: Could a Bad Season Pick Up Some Shine? 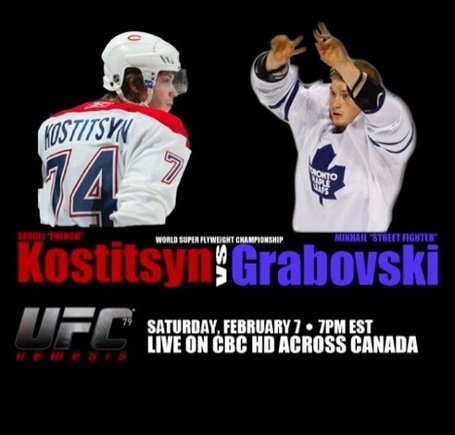 After the last Leafs' game it looked like the continuing feud between Mikhail Grabovski and the younger Kostitsyn sister would be the primary storyline since the playoffs would be a sure thing for the Canadiens and the Leafs would be playing out the string. Oh how times change. Since then the Montreal Canadiens have plummeted down the standings. So much so that the following picture is much more representative of the Habs' season: 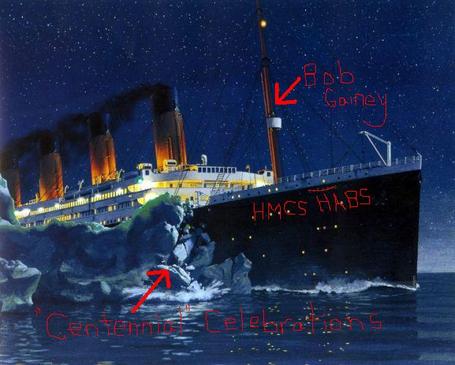 The Leafs roll into Montreal tonight poised to send the Habs faithful (as many as are left) into riot-mode. The coach that guided them to the Eastern Conference regular season title last year has been thrown overboard because he was audacious enough to see the truth: Jaroslav Halak better than Jim Carey Price. At the end of their careers that might not be true but this season and especially since the All-Star break it has absolutely been true:

While the numbers look close it's really in the consistency department that Jim Carey Price is struggling. He's definitely not engendering confidence in HF29:

The sky is falling - We don't even know where to start. How about stupid, ill-timed penalties? That seems to be a theme for this team lately. We only had two penalties, but for some reason it seemed like more. Maybe 'cause the Sens scored on both. How about a shaky (at best) Carey Price? He seemed to have come around a couple of weeks ago, now he seems to have regressed. Getting yanked after giving up four goals on 15 shots was not pretty. We know Panger would say he's only 21, but his brain may be permanently scarred.

The pressure of expectations seems to be weighing heavily on the young netminder. But he's not the only one that seems to be cracking:

So here we are today the 20th day of March 2009, Two weeks after the firing of the coach and into a dismal slide out of the playoffs and the talking heads are still talking as if the Dynasty still existed. IT DOESN'T. I remember back to the day when Houle, Tremblay and Cournoyer were named to lead the team. I remember saying that that decision was like putting, goofy, mini and mickey mouse in charge of the Disney Franchise. We've been through 5 coaches in the last 10 years. This team has become a joke. The leading scorer on the team is a defense man. We have two 20 goal scorer, a captain who has done nothing in the way of winning (minus his personal health and injury battles) A bunch of Russian mafia types (that's a play on the media hype that turned out to be nothing involving a few of the Russian players). We have an over hyped, over his head 21 year old goalie. And a bunch of other guys that nobody else in any town outside of Quebec could name.

Amen. Looks like Robbie's hit acceptance and probably only 10 years before his fellow fans. Robert L has written about how he thinks that fans of both teams have a lot more in common than they would care to admit. He also seems to understand what most analysts that chose the Habs to win the Cup did not care to learn - the Habs flatter to deceive:

The Habs of late have been a story underlined by chaos, identity, confusion, and cohesion. All their most recent silver linings - few as they've been - have just been grey areas to the colour blind. They have deceived fans with occasional bursts of synchronicity, only to leave us feelings foolish for once again believing.

Robert is an eternal optimist so he sees the Habs' latest loss not as a false dawn but as a sign of things to come. A quick look at the Habs' special teams over the past three seasons would have showed anyone with any sort of analytical mind that they were papering over massive cracks. The cutest thing from the comments in Robert's article is with the fans associating their desire to see the team blown up as some sort of characteristic unique to Leafs fans. It's more a sign that you've finally opened your eyes. Congratulations!

The one problem with Robert's plan is that he assumes that Gainey will start Halak the rest of the way. This is the GM whose previous stint behind the bench came after he canned Claude Julien for daring to sit the last masked saviour Jose Theodore. Last season Gainey had such confidence in Jim Carey Price that he traded Cristobal Huet to the Washington Capitals for a 2nd round pick at the deadline and handed the reins to the rookie. After surviving a scary first round matchup with the Bruins Price fell apart against the Flyers and had his glove hand exposed as a weakness. I would have said that a home game against a non-playoff team is the best time for Jim Carey Price to get back in the saddle.

However, Bob Gainey is playing the hypocrite and is going to try to re-arrange the deck chairs by going with Jaroslav Halak (french link). Gainey might go all out in his desperation and deprive the game of all Kostitsyns and all-star (laff) Mike Komisarek. I wonder what song will be played as this ship sinks? It should probably be this one:

Kulemin should be back in the lineup with Deveaux back on his way to Toronto while Tomas Kaberle might make his return tonight.

Anyway, how have the Habs done against the Leafs this year?

At home Jim Carey Price sees four of five Leafs goals fly past his supect glove hand as the Leaf fans in attendance (and not me despite previous plans) erupt into ecstasy. Price does have the privilege of being the answer to a trivia question: Who was victimised for Hall of Fame defenceman Luke Schenn's first career NHL goal?

Here's a visual recap of the game: 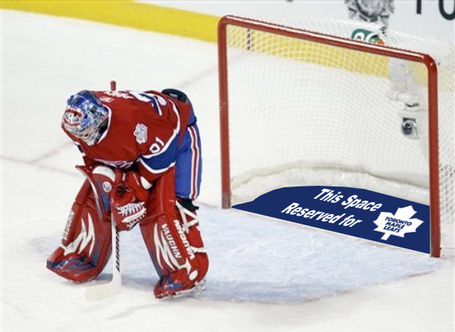 Jaroslav Halak made 30 saves on 32 shots and showed Carey Price how to beat the Leafs.

Something kind of big happened in this game. Click 'complete coverage' to refresh your memory. Along with Tom Kostopoulos' vicious assault for which he has not come close to paying an equal penitence (Paging Mssrs May, Ondrus, and Mayers) the Leafs, inspired by the actions of our nation's heroes, showed once again that good can triumph over evil.

It was a little hard for the Leafs to get up for the first of six meetings with the lowly Canadiens after starting the year off by punking the defending Stanley Cup Champions on the night that they raised their championship banner.

So which Leafs team will show up tonight? I said it before the team's last visit to Montreal and it's, sadly, true again: my plans to attend this game had to be put on hold so I fully expect the Leafs to punish me by killing the Habs. If that happens the next deck chair to be re-arranged on the HMCS Habs might be Bob Gainey himself.