Share All sharing options for: Leafs Wish the Habs A Joyeux Anniversaire! 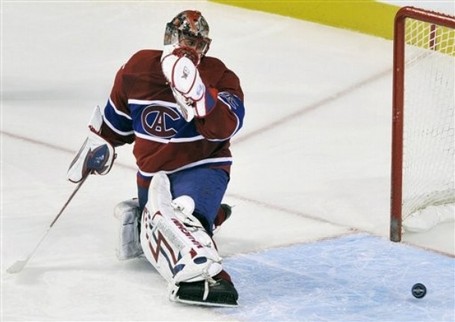 Ah yes, it's that most wonderful of times here at Pension Plan Puppets, a Monday afternoon Negative Nancy Notebook where the Leafs did something competent previously and we all get to delight in the tears of opposing fans. Sure, the Leafs aren't going to the playoffs but suddenly the Leafs have prospects coming out of the woodwork and it seems like the team is finally buying what Ron Wilson is selling. The bad apples are gone from the locker room, and the rebuild is well underway.

Of course, Leafs fans are all dumb for supporting the Leafs during a rebuild, whereas Montreal fans are smart because they only fill the Bell Centre when the Habs are great. Hold on, I'm getting a phone call.

What's that? Uh huh. Oh sure they sell out all the time. Uh huh. Eighth place you say? One point ahead of Florida you say? Well thanks for the call, NHL standings, I'd chat but I have to get back to writing.

Where were we? Oh right, Montreal is absolutely imploding. Their goaltender of the future's confidence is completely shot, their coach was unceremoniously canned (see editor's note) , and check out their list of UFAs: Lang, Tanguay, Koivu, Kovalev, Komisarek, Schneider, Brisebois, Dandenault, Boullion. No big deal, I'm sure all of those guys are dying to play in a building where they get booed every night and in a locker room that's clearly tight knit and functional.

Saturday’s 5-2 loss to the Toronto Maple Leafs was the latest banana peel on the Canadiens’ sidewalk, one more gruesome example of not getting the job done against a so-called inferior team that’s out of playoff contention. - Montreal Gazette

So called inferior? The Leafs don't have any goal scorers like Koivu, Kovalev or Tanguay. They don't have goalies like Halak or Price. Luckily that means the Leafs have players who aren't Charmin soft.

Leave it to the Toronto Maple Leafs to put their archrivals from Montreal in full panic mode. With little to play for in terms of the playoffs, Toronto still took pleasure in dominating the Canadiens at the Bell Centre Saturday night. - CBC.ca

Little to play for? It's Saturday night in Montreal with the Habs desperately trying to right a sinking ship. If the Leafs won a single game all year I'd want it to be the beginning of the end for Montreal's 99th 100th season playoff hopes.

Forwards Alexei Ponikarovsky and Mikhail Grabovski both had big nights, scoring four points to hand the Leafs a 5-2 victory over Montreal.

No biggie, Montreal got a second rounder for Grabovski. They'll probably find someone in the second round to replace Grabovski, who would be tied for third in points on the Habs. Oops.

With the game out of hand, the sold-out crowd at the Bell Centre booed the Canadiens.

In the spirit of the Canadiens, I'd like to quote a U2 song: "It's a beautiful daaaaaaaaay"

Editor's note: I published an admittedly tasteless joke about Bob Gainey's daughter in place of "the coach being fired". Due to feedback from a lot of users that I personally have a lot of respect for, and hindsight being 20/20, I decided to remove it. Please feel free to let me know I'm a jerk in the comments, I'm not trying to sweep this under the rug.